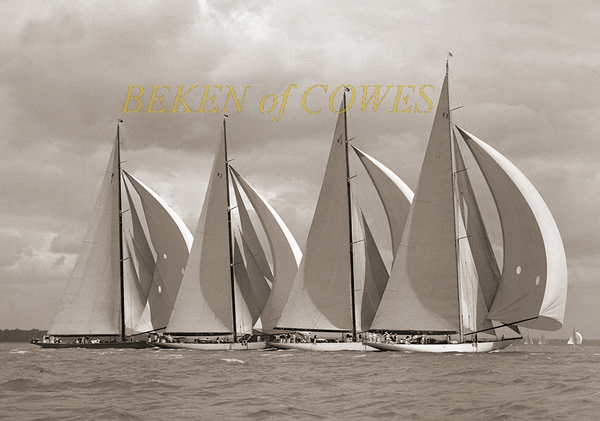 In 1929 Sir Thomas Lipton, owner of Lipton’s famous for his import of Lipton Tea from India, issued his fifth challenge to the Americans for the America’s Cup. He commissioned the build of the first J Class Yacht which signified the start of a new era in design evolution and racing. On each occasion he challenged for the America’s Cup as a member of the Royal Ulster Yacht Club in Northern Ireland. RUYC are still involved with The Cup – presenting the Royal Ulster Cup to the Club of the winning challenger.

The Universal Rule came into effect in 1930. The size of a yacht was determined (by waterline length) and this was shown as an alphabetical list. “J” signified yachts with a waterline length of between 75 to 87 feet. The addition of the new design Bermuda mast allowed the yachts to carry a huge sail plan. Nothing so large and ‘awesome’ had been built previously. The Americans had a distinct advantage over Britain in the 1930 America’s Cup. They had the money to build four J’s over Britain’s one, yet the British yacht, Shamrock V was a hot contender. She was designed by Nicholson and built at the family yard in 1930, and before she crossed the Atlantic to attend the Cup she had notched up more than 700 sea miles (1,296km), won 15 out of the 22 races she had entered and had been tweaked and tested to a high degree.

In answer to Lipton’s challenge of 1929 the Americans designed four J-Class yachts as possible defenders. Enterprise, Whirlwind, Yankee and Weetamoe were launched within a month of each other; Weetamoe and Enterprise from the Herreshoff yard and Yankee and Whirlwind from Lawley & Son’s yard in Bristol.

Whirlwind, the second J, was the most revolutionary of the four. Francis L Herreshoff had moved away from conventional yachts and designed a boat, which took the new rule to its extreme. Whirlwind combined many new ideas and Herreshoff experimented with hull shape and rig. She was the longest of the early J’s at 86ft on the waterline and remained so until Ranger and Endeavour II were built in 1937.

She was built of semi-composite construction (the other three American Js were built out of the highly expensive Tobin bronze), was double-ended and had a permanent backstay. Uffa Fox described her profile as: “Very pleasing to the eye, the stem sweeping down to the keel in a very sweet line, and to a man who, like myself, believes that a pointed stern is a logical ending for all vessels, her stern is a joy to behold.” He predicted, “If the Yacht Racing Rules govern well and wisely, we shall see Whirlwind racing 50 years hence. If they do not she will probably be cruising then.” But Whirlwind met an early demise. Her building was delayed as she didn’t meet Lloyd’s A1 scantling rules and she wasn’t chosen to be the 1930s defender. She was often out-performed when close hauled, her steering gear making her difficult to steer. She was eventually scrapped along with Enterprise in 1935. However, her unusual double-headsail rig was later adopted by the rest of the Js.

The third American J, Yankee, was the best all-rounder. At 84ft on the waterline and 125ft length overall, she was solidly made of Tobin bronze and was extremely well balanced. Designed by Frank Paine, Yankee had an almost straight sheerline and easy lines. She was a powerful contender for defender, but not fine-tuned enough to succeed. She did, however, take part in the 1934 America’s Cup trials and with alterations to her rig, to carry more sail, and bow, which was lengthened and made more of a V-shape, she then proved more successful, especially in light winds.

The fourth of the American J’s was Weetamoe, which was designed by Clinton Crane and was the narrowest of the early four. Despite claims that Yankee was the best all-rounder, Weetamoe is said to have been the closest rival to Enterprise to be the Cup defender. Charles Nedwick, in Ian Dear’s book Enterprise to Endeavour, describes Weetamoe as having a profile “that is practically a triangle, with a straight line from the after end of the waterline to the bottom of the keel and thence a line which is slightly convex, and then slightly concave to the forward end of the waterline.” In an attempt to better performance and make her less tender, her profile below the water was radically altered in 1934 with a new contour and bulb keel. The alterations failed and not long afterwards were reversed. In common with the other J’s, she had about 43ft of overhang and her hull, Nicholson opined, “was the best of all the US Js”.

When Shamrock V and Enterprise eventually met off Newport, Rhode Island, later that year, the two J’s were well matched in hull profile, but differed significantly in rig. Enterprise’s rigging was lighter, she had the Park Avenue boom, which was so advantageous to windward, and had lots of winches on board. Shamrock V meanwhile, was under-winched and hard work to sail. She has since, however, proved her success in that she is still sailing today.

The sixth J-Class yacht to be built, and the second built on British soil was Velsheda. She was the only J not built as a contender for the America’s Cup. Her owner, WL Stephenson, who previously owned White Heather II, the 23-Metre converted to rate as a J-Class in 1930, had Velsheda built in steel in 1933 at the Camper & Nicholson yard. Velsheda was a great success. In 1935 she was significantly altered, her bow was snubbed around the waterline and her stern improved. The following season she won the King’s Cup at Cowes Week. 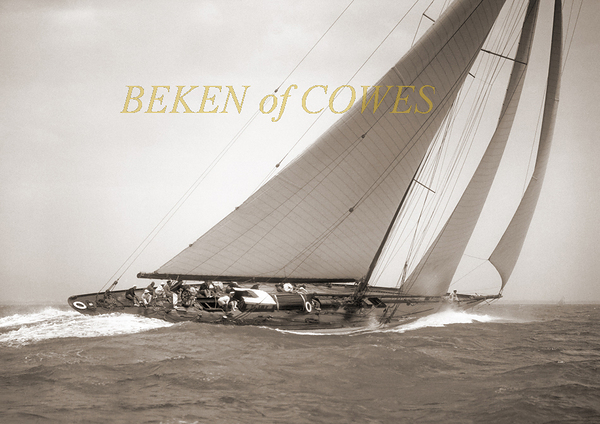 In 1934, Sopwith challenged for the America’s Cup. His challenger was Endeavour. She was Charles Nicholson’s third J-Class design and he said of her “She will have quite a normal hull… because I have thought it right to suppress possible experimental form, which would be most interesting to try out, but which I have to leave to American designers.” He did, however, produce the most beautiful J-Class and her rig was innovative.

Sopwith experimented with new running backstay strain gauges, which controlled the trim of the mast and used electronic windspeed and direction indicators. It has since been suggested that part of the reason for her failure in the Cup was due to all the gadgets on board. She was matched 83ft 3in on the waterline against Rainbow’s 82ft. However, despite being thought to be the best challenger Britain has ever built, she did not win the Cup. Rainbow, which was considered the inferior boat, beat her by four races to two.

In answer to Lipton’s challenge of 1929 the Americans designed four J-Class yachts as possible defenders. Enterprise, Whirlwind, Yankee and Weetamoe were launched within a month of each other; Weetamoe and Enterprise from the Herreshoff yard and Yankee and Whirlwind from Lawley & Son’s yard in Bristol.

Rainbow was designed by W Starling Burgess and launched in 1934 from the Herreshoff yard where she was built in just 100 days. The J stepped a pear-shaped duralumin mast, designed to take the strain of the double-headed jib – first used on Whirlwind – and she was originally rigged with a Park Avenue boom. This was later removed because it was considered too heavy.

The UK Class was depressed with the death of King George V and scuttling of his yacht “Britannia” off the South of the Isle of Wight, in accordance with his will.

Of the American Js, Yankee was the only one to sail in British waters when she was bought by Gerald Lambert and crossed the Atlantic in 1935. She was scrapped in 1941. Enterprise and Whirlwind were both scrapped in America.

1937 saw the building of the last two J’s on both sides of the Atlantic. Both Ranger and Endeavour II took the waterline length to its extreme, measuring 87ft LWL. Ranger, the American boat, was built at Bath Ironworks in Maine and designed jointly by W Starling Burgess and Olin Stephens. It was a design combination, which produced the greatest J of the fleet – the ‘super J’ as she was later known. She was built, for the cost of the materials only, of flush riveted steel plating and soon after launching had an accident. The upper parts of her rod rigging which stayed her duralumin mast shook loose and her mast snapped “with a report like a cannon”.

Ranger’s success on the water was widespread. Of 37 starts she won 35. Owner-skipper Harold Vanderbilt described her as being “slower to turn and to pick up speed, but (she) held her way longer, and was perfectly balanced on the wind.” The challenger, Endeavour II, was designed by Nicholson again and built at the C&N yard. She too was steel, but flush-plated above and below the waterline. Sopwith towed her and Endeavour, plus an entourage of 100, to America where he worked on tuning her rig. Sadly, Ranger saw off the competition, easily winning four races, and dashing British hopes.

Although they became recognised the most beautiful yacht design in the world, only 10 J Class yachts were ever built – 6 in the USA and 4 in the UK. Most of these competed in trials for the America’s Cup, or competed in the Cup itself. Several existing large British yachts, ‘Astra’, ‘Candida’, ‘White Heather II’ and ‘Britannia’, the King’s yacht, were all converted to comply with the rule and raced alongside the J’s.

After the victory of Ranger over Endeavour II, Vanderbilt wondered whether the boat was so much faster than the competition that it might kill the class. History would show this was not the case as analysis of the Holm design shows that it would likely have been faster than Ranger.

1937 marked the end of an era – it was the last America’s Cup contest for 21 years and marked the end of Big Yacht racing. Shamrock V was sold to Mario Crespi, the Italian Senator and publisher, who converted her to a ketch rig and renamed her ‘Quadrifoglio’, with a literal translation giving her authentic name of ‘4 leaves’ in Italian. This was in accordance with an Italian law, which forbade foreign names.

Weetamoe was scrapped in this year, while at the end of the season Ranger was laid up, prior to being scrapped in 1941.

HANDLING THE J CLASS YACHTS IN THE 1930’s

The Skippers had to be experienced in racing and their skill on the race circuit became a matter of pride. These mighty craft had no engines and they had to be handled with great precision to get into and out of ports. Often their experience came from sailing all types of small craft, including fishing boats, during the winter months, when the J Class yachts were laid up. The permanent racing crew in the early days was probably around 16 men thou this may have been augmented to around 30 for racing. When not required for sail changes, spare crew were often moved to below decks.

With the incredible loads on the rigging and systems it was a constant concern that J Class masts could collapse in winds above a Force 3.

Sailing small boats in often inhospitable waters gave them the skills to manage their J Class yachts. The same is true today. Skippers have to deliver their yachts across Oceans, and compete around the race course, using their skills and all the technical advantages that are available today.