In the J Class match race on the opening day of the 30th Maxi Yacht Rolex Cup off Porto Cervo, Topaz came out on top of the Supermaxi class. However the competition was far from clear cut with the Supermaxis sent off on a coastal course in a building westerly that began with a beat up the Costa Smeralda's famous 'Bomb Alley' before bearing away around La Maddalena.

The westerly wind building to 20+ knots made for a magnificent run down the coast until the penultimate leg to the finish line when with little warning the breeze died, eventually being replaced by a light southeasterly.

The game of cat and mouse saw Peter Holmberg at the helm of the longer, faster Topaz applying all his match racing talent, to keep Velsheda in the rear view mirror, despite their rival making unexpected inroads into their lead on the run back down the seaward side of La Maddalena. The status quo remained until approaching the Monaci turning mark, the spinnaker pole end fitting on Topaz blew up, forcing them to fly their kite from the bow, ultimately sailing 'wing on wing' with two headsails hoisted. While this allowed Topaz to remain in the game, it did allow Velsheda to advance from being around 30 seconds astern to taking the lead on the water.

Unfortunately when victory looked all but secured for Velsheda, they fell into the hole. As Tom Dodson, tactician on Velsheda described it: "We could see the transition from back up the track and were prepared with the jib ready to go. But it was pretty random the way it came in. We probably got the worst of it in our bunch - people who were in front of us and behind us, who went the way we went, made it through better."

Topaz forged a more successful route the transition and went on to win. "When you saw it coming you had to make a decision where you thought it was closest. Our guys spotted it to the left," explained Holmberg. "It turned into a gamble at the end, but today I'm happy about that."

Generally of the day Holmberg added: "It was great. Today was a great course. We have got a great stable mate in Velsheda. We love racing them - they are sharp, they're good, they fast. They are a great benchmark. Our guys did a good job, managing them and the pressure in the shifts." 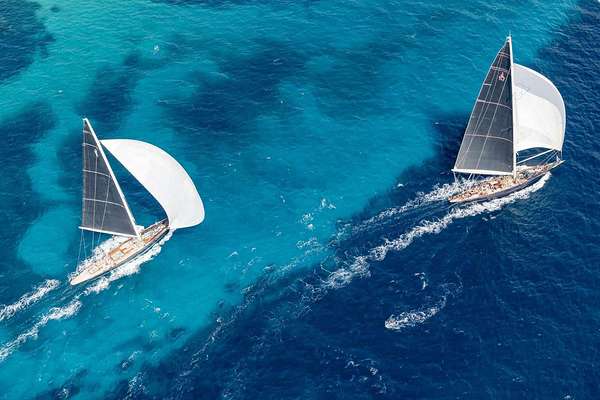