Hardly confident of their prospects going into this regatta due to it being raced under IRC, Topaz nonetheless scored her second consecutive bullet today in the Super Maxi class competing in Porto Cervo on day two of the Maxi Yacht Rolex Cup. This year marks the 30th edition of the most prestigious maxi boat event, organised between the Yacht Club Costa Smeralda and the International Maxi Association, the World Sailing-recognised body that representing maxi boats globally.

In light 10-14 knot conditions today's course took the Js upwind to the Monaci islands, then west to point 'Golf' at the entrance to Bomb Alley, before heading downwind south before a clockwise turn around Isla Mortorio followed by a beat back to the finish off Porto Cervo. However today's outcome was largely sewn up before the start gun was even fired as Velsheda was coaxed over the line early and was forced to re-start.

"We pushed pretty hard to start at the pin, but two other boats wanted it too and they were a little more manoeuvrable than we were," explained Velsheda's tactician Tom Dodson. "We had to go back and restart, so we actually feel pretty good about how we came back and ended up not losing too much." This followed losing out to Topaz yesterday in the windless transition zone close to the finish.

While fate has not been smiling at Velsheda, the outcome was well received on her rival. "We'll take that, thank you," said helmsman Peter Holmberg. "It was an unstable day - that was the card you had to be careful about, but we played that right. They were OCS but we also liked the right and got the right where there was a right shift but it was pressure that was the biggest thing there."

In fact the outcome was anything but sealed at the start as Topaz's lead was severely dented on the subsequent reach across to point Golf. As Holmberg explained: "Leg one we won that nicely and got a good lead but then the leg two, coming down into Golf, it was very patchy, random who got the puff and they got one puff and came right back into us and were right on our heel. Then for the next two hours we fought them - it was great just having them there."

The run south and the lap of Isla Mortorio went smoothly for both teams, the wind light but stable. "It wasn't too tricky," continued Holmberg. "We made good execution of sail changes. Ross [MacDonald] and Nacho [Postigo] did a really nice job of wanting to get on the inside there and get a little bit of a left bend and we did that nicely."

Ultimately the boats closed up towards the latter stage of the course but for Velsheda it was close but no cigar losing the race by a mere 33 seconds under IRC corrected time.

Velsheda is now in a situation where she must win the next three races (between now and Saturday with a layday on Thursday) if she is to prevail over Topaz.

Tomorrow the wind is forecast to be lighter than today. 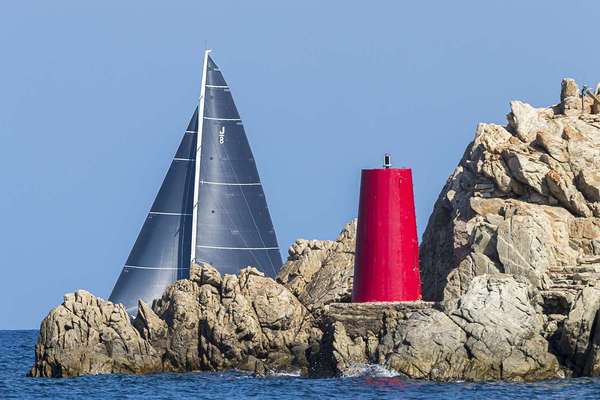