A Spectacular Competition for the J Class

It was J Class racing at its very best today with perfect sailing conditions off Menorca of 7-14 knots and two challenging windward-leeward races on Friday 23rd May.

The day began with all three J Class yachts sailing out of Mahon harbour, as spectators from the host city were treated to the memorable sight of Hanuman and Ranger reaching out of the narrow channel side-by-side, with Lionheart close behind.

In the first race Lionheart opted for the left-hand side of the course, which lifted them up to the top mark in first place, a position they held to the finish. There was a reminder of the power of the J’s at the second windward mark, when a member of Ranger’s bow team was flicked overboard by a spinnaker sheet, before being quickly recovered by a following RIB.

Lionheart skipper Bouwe Bekking said after racing: “I think we had the best start of everybody, even if we were maybe a little bit to leeward, but we went the right way and from then on it was quite easy because the boat speed is pretty good as well, the Owner is doing such a good job on the helm.”

The second race saw the three J Class yachts racing head-to-head from start to finish of the two-lap course.

Ranger led off the start, taking the pin end, with Lionheart crossing the line on port. When Lionheart tacked back onto starboard, it was Ranger who was ahead, with Hanuman gaining metre by metre. The three boats rounded the top mark with just over one boat length separating Ranger in first place from Lionheart in second, and Hanuman only two lengths behind in third.

At the first leeward gate Ranger and Lionheart split, and crossing tacks upwind as Lionheart repeatedly ducked Ranger’s transom, but as the fleet approached the layline it was Lionheart who took the advantage to round in first place.

Lionheart held on to win, whilst Hanuman and Ranger came down the final run on port gybe, with Ranger slightly ahead and to leeward. Hanuman’s only option to get ahead of Ranger was to gybe onto starboard and take Ranger away from the three boat length circle of the pin. A penalty was awarded against Ranger under Arbitration for failing to keep clear.

Lionheart skipper Bouwe Bekking said the race had been tactically challenging: “We had a port start – we were a little bit wrong with our timing and I think you just have to commit, and actually it worked out well because we were going really fast, so with all the tacks it was still looking nice.

“Then I made a little mistake when I tacked onto Hanuman, but I should have kept going because the left became so strong. In those situations you can either keep going and hope for the best, but I just decided to limit the losses and tack back. We peeled Hanuman off really nicely.

“On the run, I thought Ranger was going to the right-hand leeward mark, but they kept going so all of a sudden we could split. They still crossed us on the first cross, but it was really, really close because we had to do a dip, and then it was hard for them to tack over. I think Capey [Andrew Cape] our navigator made a really good call at the top because Hanuman was just underneath the lay so we could have tacked onto them and kept them behind, but he said sail to the layline.”

Hanuman’s tactician Kevin Burnham was also enjoying the challenge. “The competition with the other boats is just great. We happened to find a little bit more upwind speed on the second beat of that second race which helped us get back in the mix, and with all three of us together it probably looked very spectacular!

“Everybody knows each other in this class and we’re all out to win, and it’s that competitive spirit which makes the J-Class so inviting.

“The weather here in Menorca is just gorgeous. I think this is a beautiful place to have regattas, this is my first time here and I think this a fantastic place to race. And we’re looking forward to seeing more of it in the coastal race tomorrow – we’re ready to go!” 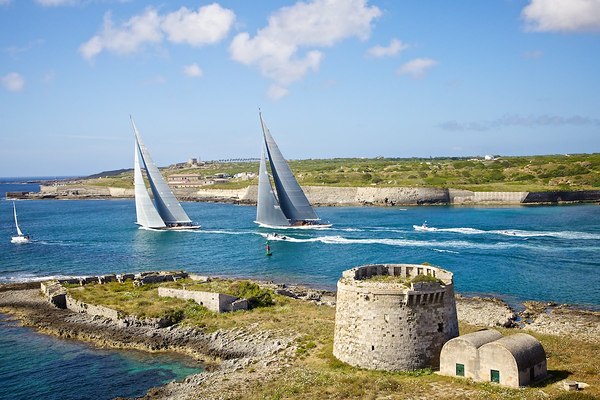