After three races the leaders at the half way stage of the Maxi Yacht Rolex Cup have maintained perfect scoreline. This pinnacle event of the maxi sailing calendar is organised by the Yacht Club Costa Smeralda in conjunction with maxi yachting's governing body, the International Maxi Association. It is also the third of five events in the IMA's annual Mediterranean Maxi Inshore Challenge.

This morning many thought today would be un-sailable due to a lack of wind. Until mid-afternoon, and after one aborted start, this appeared to be the case. Finally the easterly sea breeze established with the first start taking place at 1535. After an unusual downwind start, the fleets were sent off on a course up 'Bomb Alley', between the Sardinian mainland and the Costa Smeralda's off-lying islands, and back, before continuing on on to the Porto Cervo finish line. In Bomb Alley the wind piped up to 12-13 knots, gusting to 16.

In the 100+ft Super Maxi class, there was disappointment for the crew of the magnificent J Topaz. She led into Bomb Alley, only once again to see victory slip through her fingers as she was reeled in and passed by Ronald de Waal's 88-year-old Velsheda, exiting Bomb Alley en route to the finish.

Along with American Mike Toppa, Britain's Andy Beadsworth is temporarily in the Velsheda tactical hotseat, standing-in for absent Kiwi afterguard such as Tom Dodson, confined to New Zealand due to pandemic-related travel restrictions. Still surprisingly in awe for such a seasoned pro sailor, Beadsworth explained their pass: "There were a lot of short tacks and maybe we were a little bit faster, or maybe there was a little more breeze to the left, but we were slowly gaining on them and they had to put in two [extra] short tacks. We managed to live off them they tried to squeeze us, but we got square and took them all the way to the corner.

"It is a life experience having a big tacking duel in Js coming up through Bomb Alley."

While a layday was scheduled for tomorrow, racing will instead take place starting as usual at 1200 local time. 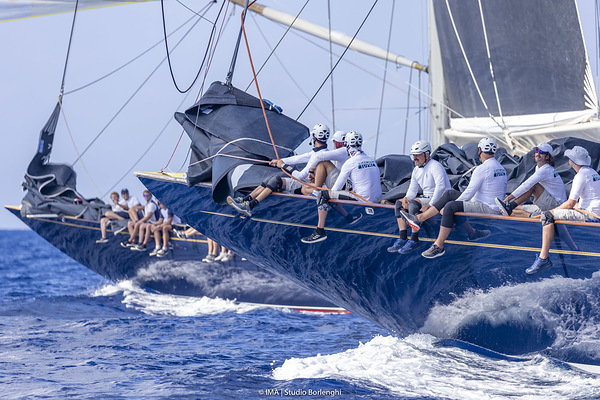