From big breeze to light, as racing gets underway at Les Voiles de Saint-Tropez

After the first day was blown off due to excess wind, the Mistral gave way today to light conditions enabling racing for the maxi yachts to start finally at Les Voiles de Saint-Tropez, organised by the Société Nautique de Saint-Tropez.

This year, with the support of the International Maxi Association (IMA), the Wally and four maxi classes within the IRC A group have their own race committee and PRO and their own race area off Saint-Tropez' famous Pampelonne beach. This leaves the smaller classes, and of course the mass gathering of classic yachts for which this event is famous, to compete on the Golfe de Saint-Tropez.

Today the race committee laid on a coastal course from Pampelonne to Cavalaire and back. After a wait for the wind to fill in, the starts were given in 8-10 knots although this subsequently dropped and the yachts also found themselves negotiating a transition zone in the wind. The IRC A.1 giants twice sailed this lap, south and then west around the Taillat headland, while the remaining classes went round once.

Among the IRC A.1 Loro Piana Trophy maxis and supermaxis, Velsheda's time corrected out under IRC ahead of George David's Rambler 88, but, considering the huge conceptual difference between the magnificent but ultra-heavyweight J and the modern beamy lightweight reaching machine that is Rambler 88, it was close. Their times were split by less than two minutes under IRC, with the Farr 100 Leopard 3 a similar amount astern in third.

The big breeze is due to return for racing tomorrow with a layday scheduled for Thursday before the final two days on Friday and Saturday and the prizegiving Sunday. 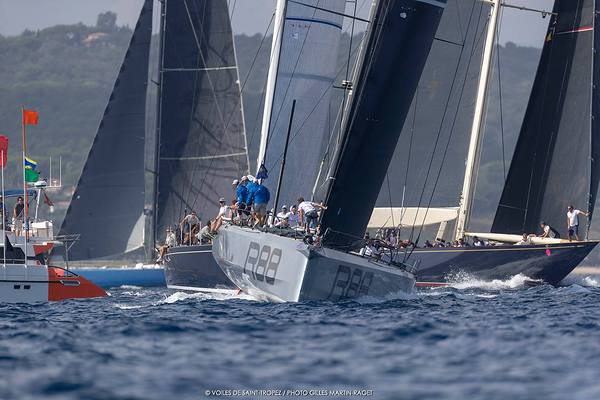