Hanuman bounced back quickly from starting too early to win the first race of the America's Cup Superyacht Regatta in Bermuda.

Although they had to return and recross the line Hanuman were able to recover as the breeze filled from the right side of the first upwind leg. Already positioned on the favoured side, they chased Velsheda around the first windward mark, capitalised when the leaders set a kite which they almost immediately had to douse and then extended away to take first gun ahead of second placed Ranger.

The crew which won the six J Class yacht fleet at the Saint Barths Bucket in March win the first of the three scheduled races at the America's Cup Superyacht regatta. Optimised for the light conditions expected in Bermuda, Hanuman looked quick in the 5-9kts patchy breeze which was affected by the cloud patterns over the island to windward of the race course.

They were pushed in the final seconds pre start by Topaz, but all three boats which started closest to the committee boat, windward end of the line – Hanuman, Topaz and Velsheda – were able to climb away from the fleet as the wind swung right and strengthened slightly. Conversely Lionheart, which started to the left, struggled initially and were forced to watch as their rivals sailed away. But, just as the first windward leg proved fickle and shifty, so was the final short beat. Lionheart was able to pass Topaz for fourth and Ranger stole second of the five J Class yachts which raced today. It is understood Svea will join the regatta from Wednesday.

Round the world race winning navigator Simon Fisher is sailing as strategist on Hanuman, strengthening the afterguard of helm Ken Read and navigator Stan Honey – who was originally Fisher's counterpart on the race winning ABN Amro 1 in the 2005-6 Volvo Ocean Race when he sailed on the youth ABN Amro 2 crew. Fisher summarised the Hanuman win: "The racing today was dominated by the clouds coming over Bermuda and that made it tricky. Despite being a little bit early, we were pushed by Topaz and ran out of room, we gybed back but were on the right side of the shift and were back into the fleet quite quickly which was good."

"After that is was a 'soldier's course' until the final beat. It was lifting a bit on the reach and we were always trying to sail our best, fastest angles. We got our chute on for a while and that was a little gain to us. Then the next reach was under jib. The final upwind was quite interesting we were a little conservative covering the boats behind us and Ranger made a good gain on the left."

"The weather has been changing all the time. You come here thinking here we are on an island in the middle of the ocean, features should be driving the weather and it should be quite simple. But really it is anything but. The front to the north of us has been chucking down fronts at us, with rain, thunderstorms and clouds, that is messing things up."

"Today the gradient wind was very light and so then the clouds really have a big effect on everything. They cause big wind shifts, big calms and so you had to be on the right side of them today." 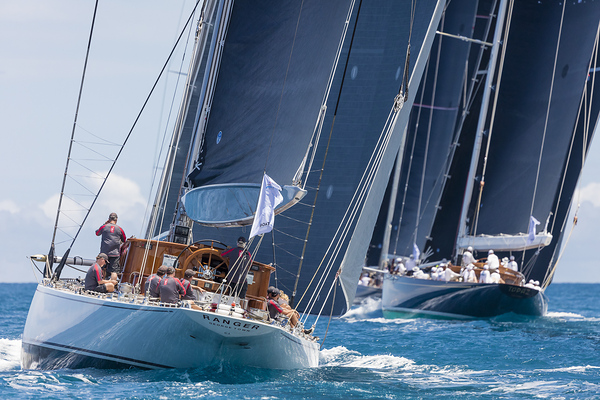