Two J Class yachts – K7 Velsheda and J8 Topaz – will take centre stage among the 53-boat fleet at next week's 30thedition of the Maxi Yacht Rolex Cup (1-7 September) which is raced out of the prestigious Yacht Club Costa Smeralda.

Both crews are relishing the chance to renew a rivalry which they enjoyed earlier this summer in Palma – a rivalry which continues to advance their respective levels, as a rejuvenated J Class contemplates a world championship at the America's Cup regatta in Auckland in 2021.

There may be a certain measure of disappointment in the Topaz camp that the J's will race under IRC at this key annual regatta which has always been popular with the J Class in recent years, but Olympic silver medal and America's Cup winner Peter Holmberg, Topaz skipper, is looking forward to tussling against the Velsheda team which he considers the class' benchmark programme. Read the preview with Velsheda here.

"The change to IRC for this event is a bit of an eleventh hour decision which does not favour us so we are not really very pleased about that. We will end up giving Velsheda about 30 seconds in an hour, so it will be a tall order to beat them but we are up for the challenge," explained Holmberg as the Topaz crew assembled in Sardinia for pre-regatta training.

"We still consider ourselves very much the newcomers to the class, their boat is the fastest. We have been doing some work with the Vrolijk office to optimise our performance but here we are, we are raring to go. Velsheda are great stable mates, great sparring partners and we are so happy to be up against them this coming week."

The return to the beautiful coastline on the north east corner of Sardinia is treasured by Holmberg and the Topaz team, not least the prospect of the challenging coastal races through the La Madalenna archipelago of islands and the legendary 'bomb alley'.

"It is simply one of the best places to do coastal races and these boats are the most difficult to get the very best from, the most difficult to get it right and sail them to their potential. I love it. This is the greatest sailing I have done with a great squad of 30 guys," Holmberg enthuses. "As sailing boats seem to go ever faster and faster and are more and more run by gadgets, it is wonderful to be able to appreciate this kind of sailing in its pure form. We have a great squad which feels very much a great European family with the least amount of rock stars."

Looking to a promising future for the class Holmberg remarks: "Interest from owners fell off because of the rating rule but as we address that with a new rule getting to the heart of the problem and owners having gone back to basics, with good management in place now as well as the plan to go to New Zealand for a world championship at the America's Cup, I think everything is looking so much better. It is a great idea to have the Class at the (America's) Cup as the Cup has gone so far forwards in terms of foiling and technology that the J Class connects the future to the past on a shared world stage. It will be great to be able to shine a little light on the past."

Meantime this past week in Palma, Mallorca JH1, world champions Lionheart have been out for some preliminary trial sails with the prospect of the Dutch flagged programme resuming for next year. 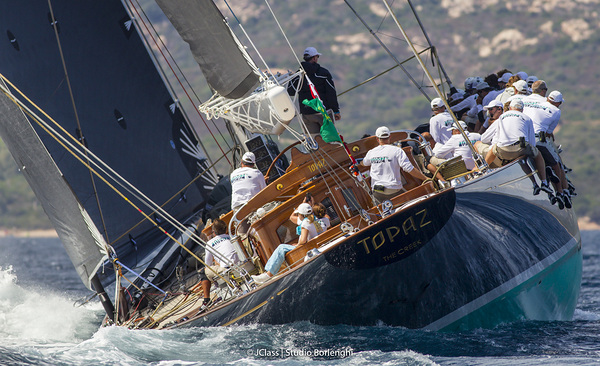