Lionheart are the Toast of Newport

On the same Newport, Rhode Island waters where the legendary Ranger cleaned up 4-0 in 1937, the last time ever that the mighty J Class raced for the America's Cup, the first J Class World Champions are Lionheart, the owner driven Dutch-flagged modern day Ranger descendent.

Low risk strategies employed on a fast, fully optimised, well travelled owner driven J Class sailed by a well drilled close-knit crew which have mostly been together since 2011 prevailed. They finished no worse than third and only won one race, but they eclipsed the highly fancied Hanuman which only returned to J Class racing this season after a three year hiatus.

The shiny, black hulled Lionheart, JH1, was built 75 years after the original design was made as part of a family of designs by Starling Burgess and Olin Stephens for Ranger, the so called Super J which dominated in Newport. Over recent years the Palma, Mallorca based Lionheart has probably sailed at more regattas than her rivals, J Class and otherwise, in the pursuit of improvement, training and optimising religiously. "It is a special title, one for the owner who gives us so much confidence in ourselves and who gives us carte blanche in how we set the boat up and how we sail. It is great for him now that he lifts the trophy today." Enthused Bekking who heads directly to Europe to rejoin his Team Brunel Volvo Ocean Race programme where he will compete for the eighth time pursuing his first overall win.

Hanuman, the US flagged team which is skippered and steered by Newport's Kenny Read won three races from seven, including today's afternoon showcase finale in front of a huge crowd, but their aggregate for second place overall is too heavily ballasted by a fifth place on Thursday which was the result of a penalty, and their sixth on Friday. Utimately that was the outcome after a sub standard start and subsequently being held to the wrong side of the course by a rival. Their penalty proved costly, just as one also did in Bermuda where they then missed out to Lionheart for the America's Cup J Class Regatta title.

Kenny Read said: "Congratulations to Lionheart, they sailed better than us this week. We left too many points out there on the race course. We are ticked off about that. At the end of the day winners win and Lionheart did a good job." Of their world title winning conservative philosophy Lionheart's tactician Bekking smiled, "I said before the championship that if we could finish top three in every race we would most likely win and it has worked out. We always started clean and we could always – except in one race – could sail our own course. I think we did a nice job of letting the boat work for us and letting our excellent crew work prevail. We just keep it simple."

"We made the boat a little heavier after Bermuda, a little too heavy, maybe but we were expecting stronger sea breezes. We were a little sticky downwind. All in all we were going just nice." "One of the key points is that Harold the owner has come such a long way, even this season, we have made steps." Bekking explains, "Everybody has their responsibilities, their own jobs to do and there are no rock stars, no prima donnas. We just believe in each other. That may be a little bit the Dutch style but mostly it comes from our owners, that is the way they like it."

Lionheart also win the Terry Kohler Trophy, as the 2017 J Class season champions, a new trophy which aggregates the results of the St Barth's Bucket, the America's Cup J Class Regatta and this first ever J Class World Championship. "We started out five years ago, a little bit low key and the owner said 'I want to race and I don't want to make a fool of myself. Five years later this is the result." Lionheart's superyacht expert Nigel Ingram recalls, "I think the strongest thing we have is the crew, I don't think we have changed a single crew position in the last year and a half. The boat is fast, the sail programme is good. We look after all the small details, we work very hard on making sure the bottom of the boat is good, it is vital in these big boats, we work hard at optimising the displacement and righting moment for the different conditions we sail in."

Hanuman, winners in Saint Barth's in the spring finish runners up here and in the season championship. Appropriately Ranger complete the World Championship podium, finishing third today to clinch third overall. They had a close match with the newer Topaz, both vying for third.

"Going into today we were fighting for third and today it was a bit sticky for us, but we have a great team and we are sailing the boat well. Murray Jones did a great job with Matty Mitchell on the bow in getting us off the start line." Said Ranger's skipper-helm Erle Williams.

The world championship concluded with the prize giving at the New York Yacht Club's Harbour Court. Hanuman skipper-helm Read praised the show and spectacle the J Class had put on in Newport, "This has been a great event, a chance for sailing to come back to the front and centre in the world again for sail handling and crew work and for majestic boats to really put on a show and I think all the teams here this week did an amazing job, every team had their day. It was so much fun and on behalf of the Hanuman team it has been an honour and privelege to be involved in it. I can't wait to do it again." 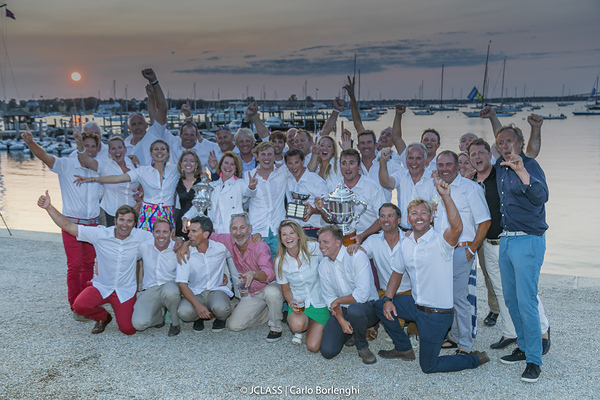