Owner-drivers and crews taking part in the Maxi Yacht Rolex Cup were eased gently into competition off Sardinia's Costa Smeralda yesterday, as they fought to make the most of variable sub-10 knot winds out of the northeast quadrant. The light start was appreciated as due to the pandemic this is the first time in two years that the three maxi classes (Mini Maxi 60-80ft; Maxi 80-100ft; Super Maxi 100+ft) have been able to race in their pinnacle event, organised by the Yacht Club Costa Smeralda in conjunction with maxi yachting's governing body, the International Maxi Association.

While the YCCS's courses are renowned for their usually strong prevailing northwesterlies that funnel down 'Bomb Alley' between the Costa Smeralda and its spectacular off-lying islands, today's northeasterly wind direction was unusual. The race committee led by Peter Craig therefore sent the fleet off to a weather mark offshore and then on an anticlockwise lap of La Maddalena and Caprera, culminating in a tactical beat up to the Monaci islands before heading south to the finish off Porto Cervo.

Among the 100+ft Super Maxis, it was the much-anticipated re-match between the two Js where there was most action. While Topaz started magnificently, Velsheda didn't and the race appeared to have been decided in the opening moments. However in a classic example of 'never give up; never surrender', Velsheda managed to gain the lead on the subsequent beat up to Monaci. "At Golf [the mark due south of Caprera], we went from a fetch to upwind back to Monaci," explained Mike Toppa, sharing navigational duties with Andy Beadsworth this week. "They rounded and went on the wind and we rounded and tacked. So we split, which we wanted because there was more pressure, and it worked out. They had to do two extra tacks and we jumped them." Ronald de Waal's team then was able to hang on to win by just under two minutes on corrected time.

Toppa and Beadsworth are standing in for some of Velsheda's Kiwi regulars, notably Tom Dodson, who have been unable to make the event due to COVID travel restrictions.

Racing continues today with more coastal races scheduled. According to Costa Smeralda regular Flavio Favini, the forecast for the remainder of the week has the wind remaining in the northeast as it was today. "The best conditions are northwest with flatter water and drier air, but I don't think we will see that this week." Races will continue until Saturday, with a lay day scheduled for Thursday. 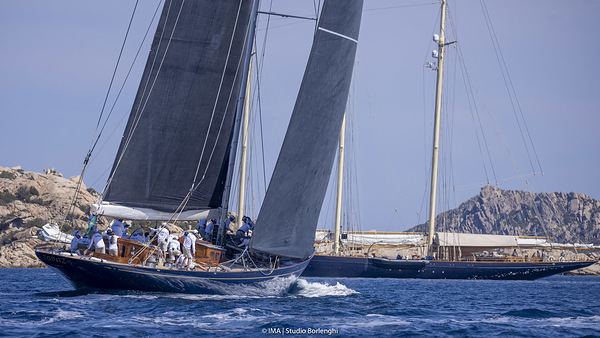