Ranger Record Round the Island Win for Debutant Owner

J Class debutant team Ranger won their first race together at the Saint Barth's Bucket - the Caribbean superyacht regatta which has long been a favourite with the historic class, the reasons for which were highlighted today.

On the 25-nautical mile counter-clockwise passage round the island, Ranger remained clear of the fray a spirited tussle at times between Hanuman and Velsheda - and pushed hard from behind to save their time on the leading, faster rated duo.

The winds were slightly kinder than for Thursday's opening day of windward-leewards a more manageable 15-18knots and while Hanuman led off the start line which was set just outside Gustavia, Velsheda progressively caught on the spinnaker leg down the outside of the island.

As the two leaders passed the rocky Petits Groupers islets, Hanuman did not give enough room to inside boat Velsheda and was penalised. The incident between the two, and the consequent penalty turns, allowed the slower rated Ranger to close down on the leaders. From there Ranger sailed clean to win their first race, a welcome compensation after having to sit out yesterday's second race due to a winch failure.

For a new team, which is racing the recently re-fitted Ranger, and for a new owner for whom this was only their third ever yacht race, they are setting expectations pretty high,

"We have to be careful with that!" grins Moray Gray the Ranger crew boss. "The owner is over the moon. But seriously he is a realist and already sees the standard and how any little slip can be punishing." He adds, "It is good to be able to come out at all today after missing the second race yesterday. We found a workaround. We only had one gear on the winch. We just tried to stay in touch with the guys in front of us who are a little bit faster than us. They got involved in that little tussle at the bottom of the run which let us back in. We were close enough to let the handicap work for us. It was a fantastic day to go sailing in the Caribbean."

Andy Beadsworth, Velsheda's strategist summed up the day. "The boat is going well. We did not get the best start, Hanuman got away but we ran them down on the outside of the island. We were closing all the time which we should be as we owe them a bit of time. They got away upwind, but the rich will always get richer on the upwind side of the island. We had this incident at the leeward mark which resulted in them getting a penalty. There was a contact which is never good and we had a little damage to the foot of the jib. It was great racing, the boats are close and it was fun. We made it a little easier for Ranger sailing extra distance trying to pass Hanuman. It is amazing to just sail these boats far less going racing."

Hanuman were subsequently disqualified for the incident and drop to third overall, tied with Ranger on seven points while Velsheda now lead on six points thanks to their 3rd,1st and 3rd place finishes.

Two days of racing remain at the St Barth's Bucket, which concludes on Sunday 20 March. 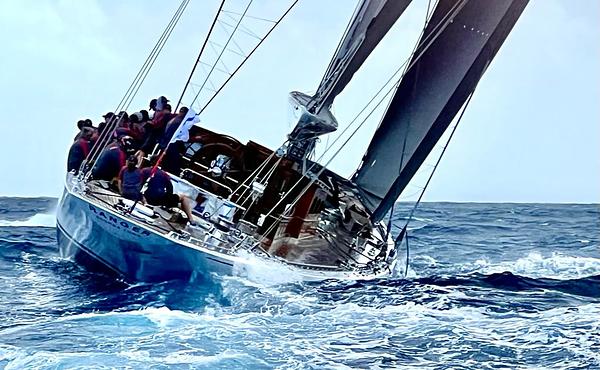