Highly regarded international sailor, race officer and administrator Stuart Childerley will be the new Secretary of the J Class Association and is set to play a key role in delivering a bright, stable long-term future for one of sailing's most prestigious and storied class of former America's Cup yachts.

Double Olympian turned offshore and one-design keelboat champion racer Childerley, 56, will officially take over the role in early April but has been working in recent months over a transition period to maintain the momentum built up by popular, long serving Louise Morton who herself temporarily returned in a 'caretaker' role during the last two years.

In the immediate future Louise will remain in the background to support Stuart who is making an excellent recovery from serious injuries sustained in a bicycle accident last Autumn. Childerley will take the lead at the upcoming Saint Barth's Bucket (17-20 March) where the J Class will race as a fleet for the first time since 2020 in Antigua.

Childerley represented Great Britain at the 1988 and 1992 Olympics in Seoul and Barcelona where he placed fourth both times. He is a double Etchells World Champion and competed on the Volvo Ocean Race and Admiral's Cup as well as building tens thousands of offshore and inshore miles on many different sizes and styles of race boat.

As an International Race Officer, Stuart was a World Sailing Course Representative at the Tokyo 2020 Olympics and has served as Race Officer with the GC32 foiling catamaran circuit among the dozens of major international classes and championships he has worked with all around the world. He was PRO for the J Class in Antigua in 2019.

Recent experience which fits him to the J Class role includes serving as Vice Chair of the International Etchells Association, recently playing a role in the resolution of the infamous Australian Mould 11 situation, leading a review of all Etchells rules, builder, and suppliers licensing and constitutional matters. He has been Race Director of the Fast 40+ Class Association in the UK overseeing sailing calendar coordination, regatta preparations with clubs and the owners group.

Looking ahead with the J Class, Childerley sees himself very much as a steady hand on the helm seeking to strengthen the foundations of the class, foster good communications and collaboration to achieve solid strategies for the future, to attract new owners who share the passion for the J Class proud heritage as well as the principles of fair, fun competition on the water and shared camaraderie on the dock.

He is already well acquainted with - and is a fan of - the new version of the J Class handicapping rule as drafted and managed by Chris Todter, and sees it as instrumental in providing fair, equable racing at the different, popular venues where the J Class will race in coming seasons.

Childerley enthuses: "Getting just the right balance in terms of the number and the locations of regattas will be important in coming years. We are looking to promote J Class yachts racing ensuring that our rating rule is respected whilst continuing to see close, fun racing of these beautiful yachts. I would hope that we can organise another class world championship within the next three years. In general, too little activity people lose interest and too many events people don't commit as they also want to do their also own thing. Creating a consensus from all the different opinions, keeping the owners happy and making sure afterguards turn up at regattas with the similar expectation are all part of the role.

"Having the new rule is very exciting and having everyone reach a point where they are content with what the rule offers will be a key also," concludes Childerley

"I think Stuart will be excellent at the job," says Louise Morton. "He has the experience and is easy to work with. He will be good with and for the owners, the pro sailors and the boat managers and offers strong race management. During this transition period, as long as that takes, I will be in the background should he need me as a sounding board. I think the future of the class is looking bright. There is a boom in Superyacht activity and correspondingly I think we are seeing new people coming forwards who want to own and race J Class yachts."

Peter Holmberg, America's Cup winner and helmsman of Topaz who is a past Finn class friend and adversary welcomes Childerley to the role. "Stuart is a lovely solution for the role in our class. I have known Stuart since we were Finn sailors back in the day and I have watched him get into race management. He brings a level of professionalism that is really good for the sport, and I welcome it in our J Class. Every big organisation needs good structure and rules to stay on course and not get pushed around. I think Stuart in the right guy, and we are all looking forwards to working with him as we go forwards." 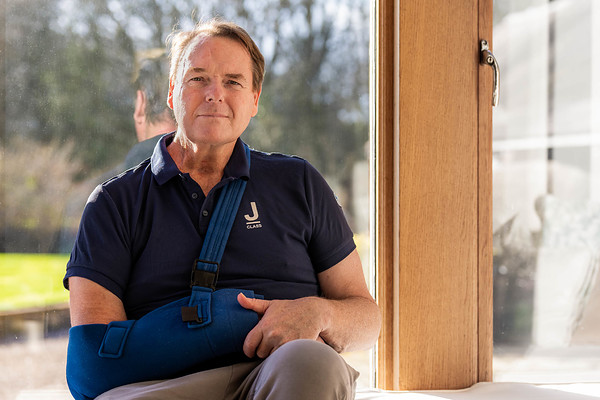