Svea open the Maxi Yacht Rolex Cup with a win

Triumphant on their debut as a team at the Superyacht Cup Palma in July, Swedish flagged Svea continued their winning ways today when they took first blood in the four-boat J Class at the Maxi Yacht Rolex Cup, racing a 34.5-mile coastal course round Caprera and La Maddalena on Sardinia's beautiful Costa Smeralda.

Although Velsheda conclusively won the start and seemed to sail a textbook race crossing the YCCS finish line first, Svea came back from a poorly timed and executed start to take victory on corrected time by just over one minute from Ranger, who themselves were winners of the first event of the season, the Saint Barth's Bucket. Velsheda took third, one minute and 10 seconds behind Ranger. Unfortunately, Topaz's jib blew up when the bow buried in a wave on their final approach to the start, and with less than a minute to the start gun they had to trail round ten minutes behind the leading trio.

For the first day back racing as a class at the annual so called 'Maxi Worlds' since 2014, the Costa Smeralda revealed a glamour day of 12-17kts of south-easterly breeze, with perfect sunshine and a few fluffy clouds. Through the islands the Js were at full speed, close reaching just metres from the rocks at times.

Velsheda started best, just to windward of Ranger, the two having a decent speed race up the first windward leg. Svea, coming along below the line on port, turned late and sharply which saw them late to the line. With Bouwe Bekking calling tactics they tacked out to the right and by the windward tack had closed up distance. On the next leg - a long spinnaker reach and run up the north of the islands - Svea gybed early and made a gain, passing Ranger long before the kites came down before the passage between Spargi and La Maddalena.

As they tacked in 'Bomb Alley' Svea closed in to the hard-working Velsheda and although the navy hulled original J opened time again on the long final close reach before the finish, it was not enough.

Bekking, who was the architect behind Lionheart's win here in 2014, said of the Svea's performance: "I think we had a very good day other than the start which was wrong timing but I feel like we did well from there on in. We did the early gybe and that made a difference, it paid, and we got across Ranger. We just kept at it. We had a nice battle with Velsheda all the way round and I think we sailed well. Niklas was driving and did a nice job. And the main thing as ever is that we learned some things together, the way we are sailing upwind but especially reaching, the way we trimming and the set up. Velsheda were going away from us at the end as they have to but it was too late."

Velsheda could scarcely have done more but had to be content with being first through the line today. Four times America's Cup winner Grant Simmer made his J Class debut, navigating Velsheda through the La Maddalena archipelago for the first time being something of a baptism of fire.

"We had a good start, we sailed the boat well and Ronald steered the boat very nicely and dear old Tom Dodson made some good calls and I was navigating. It was tricky round the back of the islands for the first time. It is at least ten years since I have been through there and the first time I have navigated so it was good fun," smiled Simmer, who won his first America's Cup in 1983 as navigator on Australia II. "Svea would beat us on time but we had a great race with them and Ranger. But it is amazing, we are sailing this 40 metre 1930s yacht, proper yacht racing having a full on yacht race. The whole 180 tons, the inertia of the boats, you just cannot turn fast. You have to go in an arc. It is fun with a great group of guys, great weather, good course." 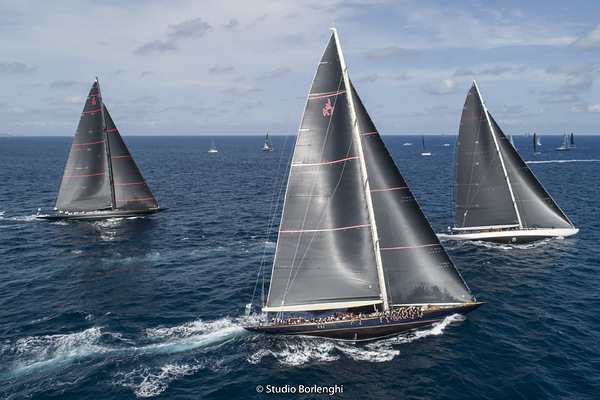