"This is something really special," smiled Svea's winning tactician Bouwe Bekking. " The heritage of this boat in Sweden is huge and of course the Swedish owners have this Swedish designed boat and win here. It is massive. Everyone has done a great job. We came here with no expectations at all. Nothing. But here we are on par with the other boats, sometimes maybe even a little better."

Ranger took victory in the last race of the regatta today, thereby ensuring that all four J Class teams competing won at least one race. Three of the four also counted one fourth in their scoreline, the exception being today's race winner whose hard-earned victory ended a run of all third places and elevated Ranger to third overall behind Topaz.

The key battle of the showdown race was actually between a modest thermal sea breeze and the gradient wind which was blowing from just north of east. For the second successive day the first windward leg was towards the shoreline at Arenal. Off the start line, Ranger, with John Kostecki and Jordi Calafat on tactics and strategy, tacked off early and came in to round first with a handy lead from Svea.

Down the long run across the bay, it was evident the thermal breeze was trying its best to roll in. Ranger, inshore, held the old breeze longest but when the sea breeze came in, spinnakers were doused, and it became upwind battle on port tack to the most leeward turn. Ranger held her ground on the next drag race in 8-9kts back to the same top mark where the course was shortened when it became obvious the conflict between the winds was going to result in a lottery. Svea pipped them on the line, but Ranger held their time on handicap.

Svea's winning 1,4,1,2,2 scoreline left them two points up on Topaz which led the standings early on in the regatta. The maiden win for Svea is all the more remarkable considering it is just six weeks since it was delivered back to Palma from the USA. The Svea crew is a potent mix of youngsters and experienced grand prix racers such as Magnus Woxen, Ben Bardwell, Jens Dolmer and North Sails' Paul 'Flipper' Westlake. The key catalyst is Bekking, who previously built the Lionheart team into J Class World Champions and the dominant team five years ago, also winning here in 2014.

Bekking concluded, "All the boats here have won a race here and I think all the boats are very similar in terms of speed. The class is very close. And I am the guy who always wants to keep it simple, stay out of trouble and don't put yourself in a place where you don't want to be. And at least sail your first lap where you want to go. And that has worked out again. And the crew have done a really fantastic job going from nothing to where they are now. That is a huge achievement, really it is."

"It has been incredible, absolutely incredible," grinned Paul Kelly, who has been Svea's captain since the boat was launched in 2017. "If you had asked me 14 days ago what my expectations were they were fairly low - new team, new owners - and I have been proved wrong. It has been an incredible effort from everyone, starting with the permanent crew getting the boat across the Atlantic. We arrived on the 15th May and it has been full noise since then. But we had a very structured training regime. Bouwe came in with the J Class experience. He drives it all very hard, but we would have it no other way, it is fun. I can't thank him enough and the boat is going faster than it has ever gone."

Finishing third today, Peter Holmberg, helmsman of Topaz was objective and happy with second, congratulating the Svea team."We are super pleased with our week. I think we overachieved on the first couple of days. Velsheda and Svea have legs and we have to do something extra special to beat them. Day 1 and 2 we had good starts and got ahead. The next races we got spanked a bit. I think we have to work very hard to get the results, so we are pleased with second. I am super pleased for Svea though, congratulations to them. To have a new owner win in Sain Barth's and now new owners win here is just great for them and for the class. They deserve it they sailed really well." 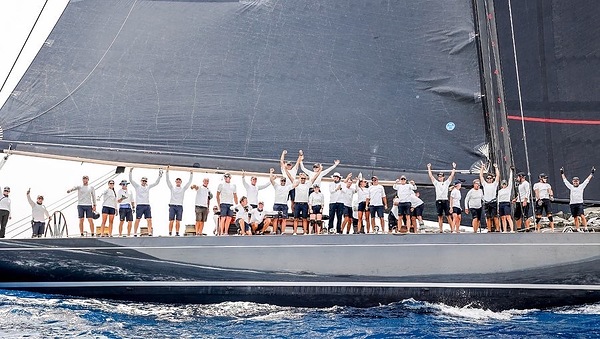