Svea won the first round-the-buoys 'coastal' race for the J Class at Superyacht Cup Palma today, a 22.7 nautical mile course which took the fleet on a long upwind SW across the bay, reaching and running back to complete a couple of smaller circuits between Enderrocat and Arenal.

The Swedish flagged boat lifted away from a nicely timed, conservative start, breaking free from Ranger's early influence, to round the first mark with a small lead over Topaz. From there Svea were never challenged rolling out her second win from three starts. Now counting a win and two second places, consistent Topaz still leads the class at Superyacht Cup Palma, but now by just a single point.

The race started in the light SW'ly and while the sea breeze was forecast to build to 12 or 13 knots, that proved ambitious, and while there was a mid-race period when the wind was comfortably in double figures, by then there was no real chance of any tactical gains and losses. After the start and the first beat it was largely a test of boat speed and for sure Svea were not found wanting.

Off the start line it was Ranger, with Ed Baird steering and John Kostecki calling tactics, who nailed the start at the pin end of the line. Svea started safely to weather of them with a nice time on distance approach allowing them breathing room above Ranger.

At the other end of the start Velsheda were squeezed up the line-up on port, unable to tack on to starboard and cross Topaz. Both ended up seconds late on the gun. Velsheda tacked away right to the west of the bay and unfortunately lost significantly on her rivals.

Svea's race was pretty much faultless until they snapped their spinnaker pole end at the penultimate downwind mark. It took them a few seconds to recover, and they sailed the last reach with no pole but they still won by exactly one minute on corrected time from Topaz which is steered by Peter Holmberg with Francesco de Angelis on tactics. Ranger was third and Velsheda fourth.

Bouwe Bekking, tactician on the winning Svea, recalled, "We lifted away from Ranger and closed up to Topaz a little and so we are going pretty nicely in these conditions."

Asked if they have changed the rig settings since starting training with the boat he said, "We tightened up the rig a little and now we just sail the boat how we think we can do it the best. The boat seems to be going really nicely. Downwind in the light the boat is maybe a little sticky but that is what the VPP says anyway, under 7kts of wind we are really slow compared to the other boats. On the first run Topaz was maybe getting into us a little. The loss of the pole on the last run to the finish maybe hurt us a little but at least we got round the track, and no one got hurt, that is the biggest thing."

Though the crew is new to J Class racing, most are from successful Solent grand prix boats with many international honours to their name. They looked slick all the time, getting the sails up and down well.

"The nice thing we have is we have a lot of good guys and they are doing a really good job. We had eight days training which is fine, other people have been sailing these boats for weeks. And you have to do the practice otherwise it is just too dangerous. But our drops are good and a lot of it is having confidence. That is nice. It is great with some of the good guys on the boat I have sailed against and not with. The whole team is doing an excellent job. One of the owners is steering today and Magnus Woxen does the starts," Bekking concluded.

And so, Topaz still lead by a point, and Francesco de Angelis tactician was not unhappy with their day. "We are happy with the race, I think we sailed well. We did good manoeuvres but I feel Palma is also still a tricky place to sail. You make small mistakes and can lose a lot. I think Svea sailed an excellent race as well. They should be happy with their pace, but I think all the boats are very close and I think overall the group should be happy. There is nobody unhappy with their speed. We caught a little on the last run but they had stretched on the previous two legs and so it comes and goes a bit. But I enjoy sailing on Topaz it is a nice team."

And Ranger are very much learning the gears, what makes their boat go in the lighter Mediterranean airs. On a boat speed course, local ace Jordi Calafat, pointed out, "It was a long race that was kind of decided on the first cross and we feel like we did not do anything much wrong. Svea had the boat speed on that first beat, and we could not match them. They were a boat length away and sailed away. We could not cross them. We are learning a bit, but we are still missing a bit to be competitive in this light breeze." 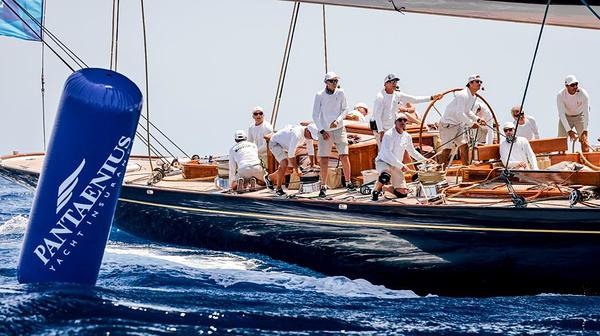