The Sorcerers of the Bay of Palma

The J Class fleet of four boats, Ranger, Svea, Topaz and Velsheda line up for two windward-leeward races tomorrow, kicking off four days of racing at the Superyacht Cup Palma. There is no clear favourite among the fleet. Ranger won in Saint Barth's in March but the new crew have not raced together in the Mediterranean; Topaz are considered to be the dark horse; Velsheda are widely recognised as the benchmark operation in terms of crew work and consistency; and whilst this will be Svea's first event with new owners and crew, tactician Bouwe Bekking who won the J Class world championship with Lionheart, knows the Bay of Palma as well as anyone and has triumphed in dozens of different classes over the years.

The Bay of Palma is one of the most popular race courses among the pro sailors, many of whom have raced major championships here for more years than they care to remember. And almost all of them have accrued a real in-depth knowledge of the wind trends and patterns over the course of each season. But within the J Class crews there are certain individuals considered to have a higher level of 'local knowledge' and even over a late June week when sea breezes should be the norm, they might make the winning difference.

On Topaz is Palma based navigator Nacho Postigo who some call 'the wizard of Palma Bay'. Looking at the next few days Postigo smiles: "For sure this is still the best time of the year in Palma for sea breezes. The water is not yet as warm as it gets later in August and September, and you still have big differences between the land temperatures and the sea temperatures. The best ingredient to add to that mix is the easterly gradient which it looks like this whole week. Those two combined usually delivers the best sea breeze. So, for example today we ended up sailing in 20kts of sea breeze. But having said that it will depend a lot on the gradient wind direction to get a proper sea breeze or whether we get a fight between land breezes and the sea breeze. And that can make the race committee's life very hard.

And so the positioning of the race courses will need to be decided on a daily basis. You have to pick up whether there is NE'ly which will wrap around the island and the breeze comes in eventually, or the easterly which wraps south and comes in. But if the gradient comes in from the north it can be troublesome."

But does the level of local Bay of Palma knowledge that some sailors like him have give an edge? "What is interesting for the Js is making the right call for the jibs. You have to do that very early, almost one hour before the start of the race. That gets everyone scratching their heads because you look at the conditions and you say, 'I think it will pick up' and someone else says, 'no it will only reach 12kts'The afterguard make the final call but it always good to have different inputs. That is where the local knowledge can come in."

Calafat is king
Olympic gold medallist and America's Cup winner Jordi Calafat sails on Ranger. He maybe a relative newcomer to J Class racing but he knows the bay like no one else in the fleet. Postigo said: "Jordi Calafat is the king He is from Mallorca. He grew up on the Bay and knows it very, very well as well as being an excellent sailor. And so that will be most evident at the start of the windward-leewards. So sometimes you will see the fleet start on starboard and wait for the wind to shift left and then you might see the locals do something different. And you are wondering 'why is Jordi doing that and tacking to the right."

"This is Jordi's bay. He has sailed here so much. He will be pretty specific here with the exact number of the wind direction you will see rather than telling you if the breeze is going to go left or right. He will narrow it down to a couple of degrees and give you the exact pressure. And then when it does get funky at the end of the afternoon when the sea breeze collapses. I am sure he can make a difference this week especially as he has sailed with JK (John Kostecki) so much. I come from more from a raw weather 'this is what the weather files say, this is what the models say' and then see if Jordi agrees or not. Normally they are pretty close here. You can always interpret the flat numbers on a page whichever way you want to. There is a lot of small scale stuff going on as well, looking at the next 100 metres on the water and Jordi is very good at reading that too." 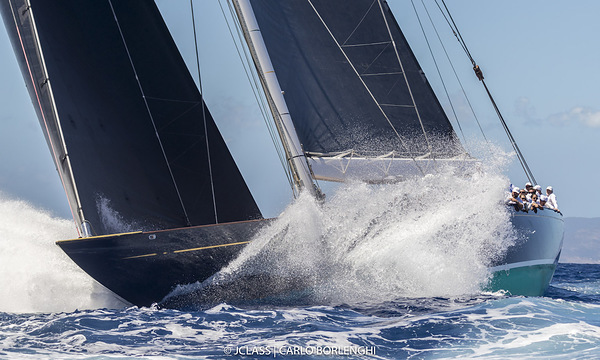