Topaz upheld the J Class record for Class winning success at Les Voiles de Saint Tropez when they topped out a good week with a third win in a row today, (Saturday 9 October), to take overall victory in the seven strong IRC Class 2.

Velsheda, which had to retire from the first, breezy race earlier in the week after sustaining mainsail damage, finished second overall in the division, twice finishing second behind their long-time J Class rivals. And so, between Porto Cervo's Maxi Yacht Rolex Cup in September, where Velsheda won, 2021's J Class honours are even.

Timmy Kroeger, Topaz's crew boss commented: "Today's race was a good one in 17 knots and more with quite big seas. Peter Holmberg our helmsman did a good job of controlling at the start and from there we were able to keep Velsheda in check all the way out of the Bay. They really came into us on the last breezy, tight spinnaker run but we had some really excellent crew work to make a great final drop which meant we won.

"We are delighted. Our crew did a great job this week. Velsheda sail well and we know the differences between the boats, they are a hard nut to crack, and we feel pleased to have done that this week. Saint Tropez is a demanding place to sail. They won in Porto Cervo and we won here. It has been wonderful racing against them this season," Timmy concluded.

Velsheda's tactician Mike Toppa explained: "In the end we left too much time on the table, but Saint Tropez is a difficult place to make gains. Most of the courses ended up being one-way parades with little chance to make tactical gains and that puts a lot of pressure on the starts. You have to win the start or you have little chance. And it is unfortunate to only get in three of the five scheduled races. When we damaged the mainsail, we thought at the time 'OK let's move on from this, that is our drop (discard)' but with only three races we end up carrying it. But we got two seconds and that is good, we learn from it, but it is not up to the normal standard." 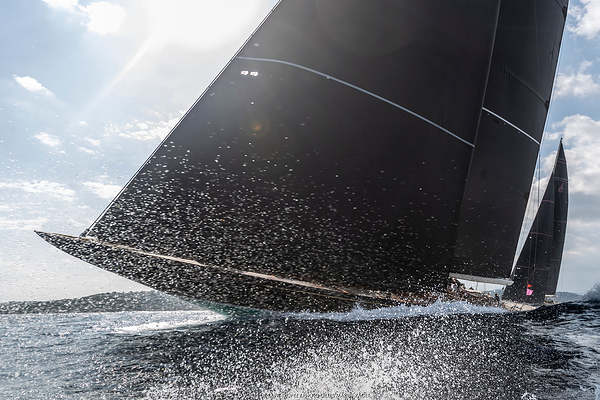