After Wednesday was blown out due to excess wind, day three of racing for the maxis in week two of Les Voiles de Saint-Tropez so nearly didn't occur as come start time the wind remained elusive. Fortunately, at around 1330, the wind flicked into the south enabling the race committee from the Société Nautique de Saint-Tropez and the event's co-organiser, the International Maxi Association (IMA), to get proceedings under way. The well-conceived course saw the boats sent out to marks due east of Pampelonne Beach for a pleasant afternoon's racing held in 12-14 knots and flat water.

In the IRC 2 maxi and supermaxi class, it is not the usual J Class 1-2 on the scoreboard, only because Velsheda retired on Tuesday's first race with sail damage. However, after today's second place Ronald de Waal's supremely elegant yacht has recovered to third overall behind the immaculate 37m Dubois-designed Silvertip. Meanwhile out in front and making amends for their defeat last month at the Maxi Yacht Rolex Cup is Topaz, the longest yacht competing this week.

Topaz's skipper Peter Holmberg, himself a former Alinghi helmsman, said of their race today: "We managed to get a better start than them [Velsheda]. It is a bit tricky to get off the start line - a reach, which is always unusual, but we came out with our boat in one piece, bow ahead of them. We took advantage of that and pushed them back a bit and there weren't many passing lanes because it was a reach, so the boat ahead benefitted which helped us. On the long downwind, we did well as that is where we have an edge on them, and at the end of that we had enough of a lead to protect on the upwind. Francesco [de Angelis tactician] connected the shifts and put us in the right place versus them. Smooth water helped us a little bit. We could pick the sides of the shifts and that was enough for us to hold on to our lead."

Racing will hopefully continue tomorrow but this will depend on the wind. As Peter Holmberg explains: "The Mistral is either side of side [in Saint-Tropez] and will be fighting it could go either way." 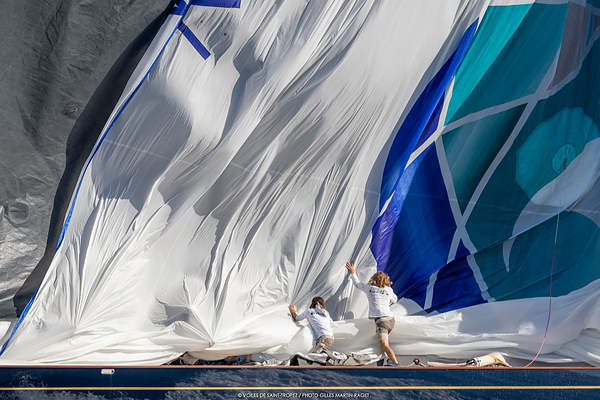