While it was not the fierce northwesterly and flat water for which the Costa Smeralda is notorious for yacht racers, today, after three relatively light races, the wind was knocking on the door of 20 knots for the penultimate day of competition at the Maxi Yacht Rolex Cup. This was the most breeze seen all week and the reason the event, organised by the Yacht Club Costa Smeralda in conjunction with maxi yachting's governing body, the International Maxi Association, has had its layday postponed until tomorrow.

Today in an east southeast breeze the bulk of the fleet sailed south and then clockwise around the islands of Mortorio and Soffi, before returning to Bomb Alley and racing a clockwise lap of La Maddalena and Caprera before returning to the Porto Cervo finish line. Only Mini Maxi 1, including the former Maxi 72s raced two windward-leewards (the only windward-leeward racing set to happen this week).

In the Super Maxi class of 100+fts none of the other competitors have so dar managed to usurp the two J Class yachts from the top of the standings. Today, Topaz was just close enough to Velsheda's transom to win on corrected time for the first time this week, but by just 16 seconds the closest finish across all classes so far this week.

"That's made my day!" said Topaz's beaming helmsman Peter Holmberg as he came ashore later. "We had some winch issues before the start so we were full panic and didn't have a chance to fight them at the start. I have a knife [Topaz], they have a gun [Velsheda] - so I have to be close to them to do any damage. Our strategy was just to stay close and we kept coming into them. As soon as we are downwind we do have a little bit on them. So we fought for position on them and got it and led around and then on to the finish they just reeled us in."

Velsheda passed them but on the finish line the lower rated Topaz was literally 10ft behind. "We get closer with these two 180 tonne boats than I get in my Finn!" quipped Holmberg. "We are riding each other's stern with very little control. It is a scary, scary situation. We were locked together all day. It is great racing, frustrating, but they are a great competitor to have. They push us hard, but our team deserved to win today."

Racing at the Maxi Yacht Rolex Cup will conclude with a final coastal race for all fleets on Saturday. 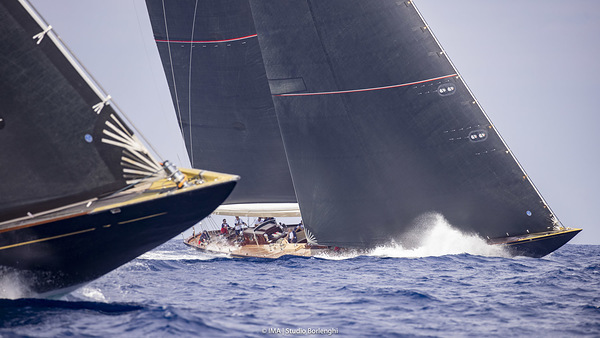