Velsheda claws one back

Topaz's winning streak at this 30th anniversary Maxi Yacht Rolex Cup came to an end today when Velsheda managed to rebalance the scoreline in the Super Maxi class to 1-2. Today's course took the boats back into Bomb Alley on a clockwise course around La Maddalena before finishing once again off Porto Cervo.

While there are 47 other maxis competing in this event organised jointly by the Yacht Club Costa Smeralda and the International Maxi Association, the official body that manages and promotes maxi racing globally, the two Js were locked in their personal match race with a ferocity every bit as equal to an America's Cup match.

After being OCS in yesterday's start, today Velsheda was late and this played into the hands of Topaz, as Topaz' helmsman Peter Holmberg recounted: "We were lined up on starboard, but the objective is always just to beat these guys. So we met them on the start line and we crushed them and we decided to keep crushing them, because crushing them was the objective." And all this before the race had even started.

With both starting on port, a crushed Velsheda meekly tacked away after her mauling into an evil seastate, despite the moderate 12-14 knots of northeasterly breeze, that caused both of the giant Js, despite their 200+ tonne displacements, to start pitching.

Topaz went on to lead around the top mark and around Monaci but here they lost a spinnaker sheet during a gybe and were left with the giant sail flogging for several minutes. "We were just a second late with the new sheet, which fell off and went under the boat - that crew error got them back in the game," explained Holmberg.

At the Golf turning mark into the southern entrance to 'Bomb Alley', Velsheda got inside but as they dropped the kite they were luffed heavily by her rival. "They kept turning and luffed us head to wind. It felt very much like America's Cup sailing. They are aggressive, sailing hard and taking no prisoners," said Velsheda's strategist Rod Dawson. Holmberg gave his take: "We did a really nice job of keeping our speed as we went around and kept our overlap on the turn and were able to luff them. It was aggressive, but we had to hang on. Then they started to roll us and we did another aggressive luff and got another little jump."

Velsheda's death blow came at the top of Bomb Alley as the boats were rounding the top of La Maddalena. "They did a really nice job on the final turn," continued Holmberg. "Where we should have been able to hurt them, they went inside of a rock/hazard and got a free lane. So now it was game on again and fighting all the way. After some more close crosses and dips, at the very last corner whoever was ahead was going to win and they were just ahead of us for the reach to the finish. Our team worked hard, but hats off to them they did a great job."

Rod Dawson congratulated his rivals. "Today it was really rough for the wind speed we had. It got lighter and lighter and the sea state stayed up which is where Ronald and the speed team did a great job of keeping the boat moving. We are pleased to get one back on the Topaz because they've had two great days."

Tomorrow is layday at the Maxi Yacht Rolex Cup. Racing resumes on Friday and concludes on Saturday. 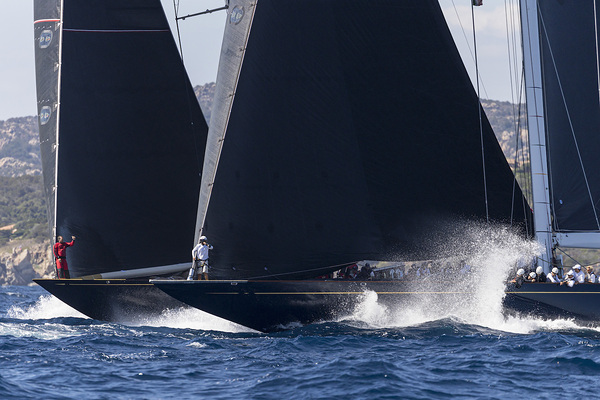