With a victory in the must win last race Velsheda lifted the J Class title at the Superyacht Challenge Antigua. Their victory in the last contest evened the scoreline at 3 race wins each so Velsheda triumph only by virtue of countback.

While Lionheart were often ahead they let too many small sail handling errors cost them when the more polished Velsheda team were always ready to pounce. As the most experienced J Class team which has continued to race year in year out Velsheda's crew work was a little better than that of Lionheart for whom Antigua was the first regatta since winning the J Class World Championship in Newport in September 2017.

After a collision in the pre-start before Race 1 resulted in damage to both Topaz and Svea neither boat could take any further part in the regatta. And while the class were due to compete in two back to back Caribbean regattas, the Saint Barths Bucket which was cancelled due to the Coronavirus pandemic.

Velsheda won the only race sailed on the first day of the J Class at the Superyacht Challenge Antigua.

Although world champions Lionheart made the better start and gained control on Velsheda early on the first beat of the windward-leeward course. When a gust hit at the windward turn, Lionheart touched the buoy with a rope and so had to make a penalty turn.

This allowed Velsheda to pass early on the run. From there they were unchallenged by their sole adversary and recorded the first win of the 2020 season.

The race was contested in an 8-16kts breeze.

Honours were then shared evenly on the Friday for the J Class at the Superyacht Challenge Antigua.

Velsheda won the first race ahead of Lionheart but the world champions got their revenge on the second windward leeward contest. Lionheart led off the start line and then kept the regatta leaders under wraps until the finish line to record their first win from what was the closest and most exciting race so far.

In 15-16kts of E'ly breeze Velsheda established the lead from the first cross in the first race and were able to extend away to win by just over a minute from Lionheart.

On the second race Lionheart started on starboard and crossed Velsheda but from there a spirited tacking duel ensued up the first beat. The pair were still even at the leeward gate. The second upwind was more of an open, boatspeed contest Lionheart taking first gun by four boat lengths.

On a day during which there were many transition zones and big changes in the wind as well as heavy rain squalls, the persistence and patience of race officer Stuart Childerley and his team paid off with an excellent single, close race. With the breeze at 11 kts Lionheart started slightly better at the pin and could cross by one length to control Velsheda about half way up the beat, leading around the top turn by 24 seconds.

But that margin was soon nullified when Lionheart made a bad gybe and lost control of their pole, leaving it on the wrong side of the boat. They had to gybe back on to the pole and lost Velsheda. But by the finish the dark blue hulled boat was only just ahead, Lionheart winning by 14 seconds on corrected time

The J Class definitely used the best of the wind available on the island. While the Superyacht fleet had no wind and no racing, down south on the J Class area there was a northerly breeze which started around 8 knots and built to 13 to allow two good races to be sailed, the wind only just fading away entirely as it was finally sucked away by a big rain cloud to the east.

Lionheart won the first race, able to cross Velsheda early on the beat and not challenged thereafter, going 3-2 up for the series.

The deciding contest saw an even start. With the dark rain cloud to the east, beyond the right flank of the course Velsheda chose the right, perhaps anticipating a favourable shift on that side, Lionheart on the left kept better pressure for longer and were able to lead at the first windward mark. But on the downwind they tore their spinnaker in a gybe and that allowed Velsheda to slide past and lead. Lionheart's pain was exacerbated as the breeze faded just at the finish line, allowing their rivals to increase their winning margin in a contest which was still in the balance down the last run of the last race. Drawing level on points Velsheda win on countback.

"It is very nice to win. It is always nice to do a regatta which comes down to the last run of the last race. All credit to Lionheart they had their foot on our throat during that last race but we never gave up. We could see it might change and that it was a little bit funky at the bottom of that last run," said Campbell Field Velsheda's navigator. "The boats are very similar in speed. They had some bad luck. We knew that with group of guys who have been sailing this boat so long that we have a lot of manoeuvres in the quiver, manoeuvres we want to do. We made a couple of late calls because we could, at the top mark for example. It was unfortunate for Lionheart today, they had their time on us."

Louise Morton, Class Secretary commented: "Under the circumstances we were pleased to be able to deliver a set of good races which saw the two J Class teams enjoy excellent, exciting competition which remained in the balance until the end of today. We are sorry that the other two boats were unable to compete after Thursday's unfortunate collision. As a class we remain thankful that the injuries to crews were not more serious or more widespread. We have fully reviewed what happened and lessons for the future have been learned in every different area." 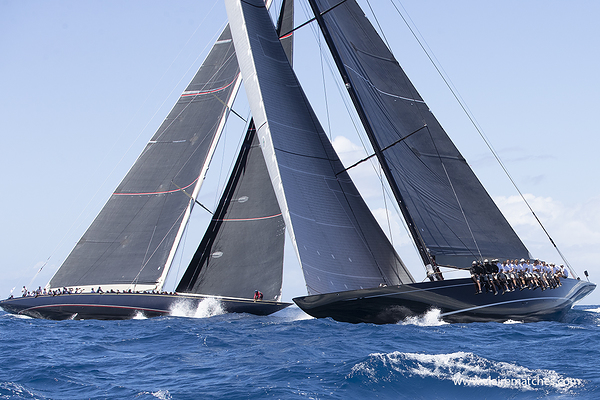