The J Class duo Velsheda and Topaz dominated the Super Maxi class at the Maxi Yacht Rolex Cup which finished on Saturday when insufficient wind forced the cancellation of the final races.

With a scoreline of three firsts and one second place, Velsheda held off the constant threat from Topaz, who won Race 4, to take victory by two points ahead of their J Class rivals.

Both crews had changes to their normal, established team line ups due to limitations on travel but both were quick to shake off any rust and resume the spirited, top-level duelling which propelled them to monopolise the top places in the class.

For most on board the highlight of the week was a tacking duel on the second day while the final race went to Topaz by just 16 seconds.

"We are very happy with the win and the regatta as a whole. The boat is going well and we had good boat speed all around," noted Barney Henshaw Depledge, captain of Velsheda which had Andy Beadsworth and Mike Toppa as strategist and tactician respectively and Jules Salter in as navigator.
"It took just a little bit of time to get settled in but the decisions at the back of the boat were clear and cohesive very readily while always keeping it safe. Ronald (owner-driver) locked into the conditions quite quickly which was good because it was not easy with not much wind and some chop. And it was good under the circumstances that his and my experience of the boat came into play a couple of times when we were crossing boats. It is just good knowing the boat exactly in these tight situations."

Speaking of the tight racing, Henshaw continued: "The tacking duel was just amazing. We all just kept working and taking the fight to them. We got a nice lee bow on them and then they still came back. To have such close racing was just great. And the last race Topaz just kept coming into us all the time, there was seconds in it. I knew it was close, but this was top, top, top level racing."

Topaz helmsman Peter Holmberg summed up the week: "We had a mixed bag of results, but it was wonderful to be back racing, even more wonderful than we imagined. Porto Cervo is one of the most beautiful places in the world to race and it was a great week and a good regatta.

"We had everything we needed and the potential to win but one or two things held us back. We had a new afterguard and it takes time to get the fluidity and speed of decisions when they need to be instantaneous, split second stuff. But we did a lot of things very well and led two races which we could have won but little things cost us, not least running into traffic from other fleets. But the boat's going well. Under ORC Velsheda gives us a little time but we are not going to complain, they are the fastest and the benchmark J and we love racing against them. The owners were delighted with the week, the crew work was impeccable and the boat did not let us down with any mechanical problems. We can't wait for Saint Tropez."

The next event for the J Class yachts is the annual Les Voiles des Saint Tropez in the French Riviera, September 25-October 2. 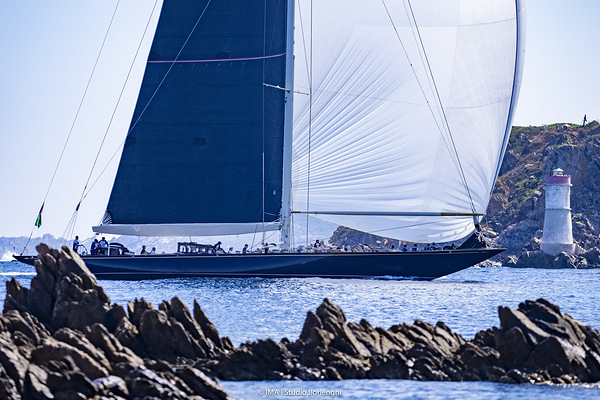