The final day of Les Voiles de Saint Tropez 2019 enabled the maxi teams to get some deciding points on the board after a week that has proved challenging to crews and race officials alike. Saturday's race was just the third of the regatta after too much or too little wind caused much of the program to be cancelled.

With the support of the International Maxi Association, the Wally and four IRC A maxi classes this week had their own race committee, PRO and even their own race area off Saint-Tropez' Pampelonne beach.

On the final day the yachts were sent off on a coastal course starting in around 10 knots. However with the gradient and sea breezes fighting there were some tricky holes and transition zones and ultimately the race committee opted to shorten course. Despite the conditions the competitors were pleased to have got in a last race.

Among the IRC A-1 yachts racing for the Loro Piana Trophy, Velsheda's run of bullets came to an end with the Farr 100 Leopard 3 prevailing. A fourth left Ronald de Waal's magnificent J tied on points with George David's Rambler 88, but winning on countback.

Following Topaz's technical set-back at last month's Maxi Yacht Rolex Cup, Velsheda was the sole J Class yacht competing this week. Of the final race tactician Tom Dodson said: "We had to finish no more than three places behind Rambler 88, which we did, so we are happy.

"It is not the same as racing against other Js. When you are not beating up on each other like we normally are, you sail against the clock which gives you a better chance on handicap." De Waal was pleased with his regatta. "He likes to mix it up - he just loves the boat and loves getting on a long leg in steady breeze to see how well he can do it. This week has been good for him and the trimmers to try a few different things."

And what's next for Velsheda? "We decided how we are going to campaign the boat for the next two seasons," explained Dodson. "It starts in Antigua in March and then St Barths and that will be the build up for New Zealand. We will leave St Barths in April and be in NZ in November." 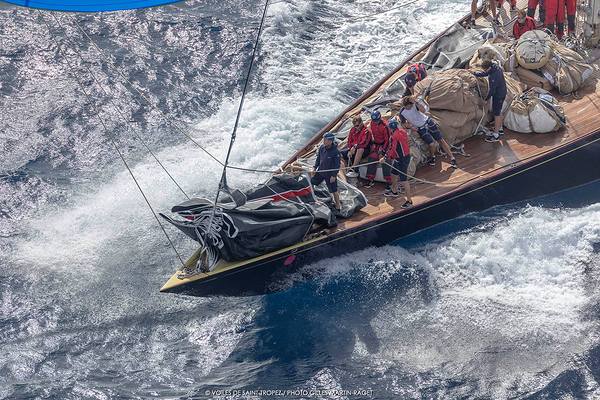