Velsheda broke the Svea string of three back-to-back wins today in the J Class at the Maxi Yacht Rolex Cup, when they triumphed around an engaging but relatively short 26-mile coastal course, down and back up the La Maddalena channel, or 'bomb alley' as it is euphemistically known, in 9-14kts of easterly breeze.

Although the series leaders Svea started well and were 44 seconds ahead at the top of the first windward leg, Velsheda stayed out to the right on a long downwind and found extra wind pressure and a favourable shift in wind direction which allowed them to enter the channel on terms with Svea.

In perfect flat water and with both crews working hard to get the most of their respective boats, Velsheda was able to ease only slightly ahead. Several times Svea came back into them just enough to overlap them slightly but at the leeward, turn the Quebec mark at Spargi island Velsheda were a couple of boat-lengths clear as they turned back upwind for the climb back up the channel.

Velsheda made their winning gains on the final third of the course. Svea had a couple of periods in lighter airs and had to do two extra tacks coming through the little islands just before the turn to Porto Cervo. Through the finish line at the Yacht Club Costa Smeralda line the owner-driven Velsheda was 1 min 34 seconds ahead of the owner driven Svea. On corrected time, this saw Velsheda win by just 36 seconds after three hours and seven minutes of racing. Ranger, with Ed Baird driving, took third and Topaz fourth.

Smiling, Velsheda's Tom Dodson said, "We raced our own race and that was a good one for us. We had a good start but could just not hang on to Svea and they got away a little, but then Andy Beadsworth called a nice one down the first run, he predicted the wind to go round to the right and so we went into the corner there and got a ten-degree shift go our way. Coming back before the alley we got back to them and needed all the shift to just get into the corner into the alley ahead of them and that was it. It was a great run, a big tussle all the way down the run."

He also paid tribute to the series leaders, "Hats off to Svea they had a little edge on us downwind and it could have gotten aggressive but we respected each other and that was nice."

Svea's Bouwe Bekking was equally effusive about how much the Svea team enjoyed their race.

"There was lots going on, it was a real fun race, and everyone was really on their toes," he enthused. "We had another great start and that set us up. Then at the top mark we saw that all the 72s had done a gybe set and so we did that too. Velsheda made the best call on that run and that set them up for the rest of the race. I think they had more pressure and at one stage they were six or seven lengths ahead of us. And after that we just had a really nice yacht race with them. At La Maddalena we went between the stake and the rocks where there is a gap of half a boat length, so we were giving everything to come close to them today. It was a good fun race."

Thursday will be a lay day for the competing teams, before a return to racing on Friday. 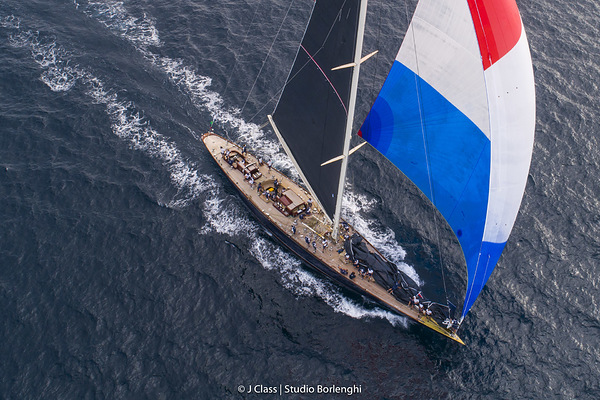