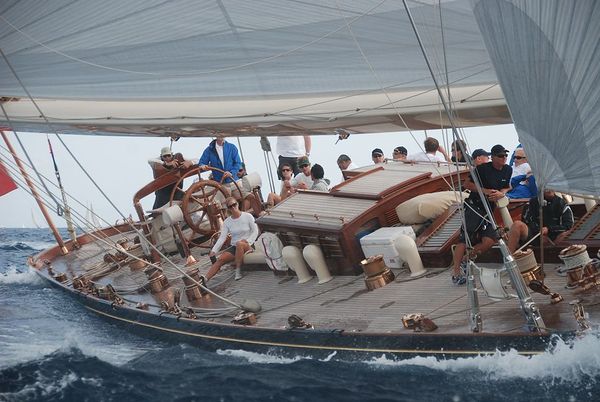 Shamrock was originally owned by Sir Thomas Lipton, the owner of the English grocery chain ‘LIPTON’, and famous for his import of Lipton Tea from India. Shamrock V was built in 1930 for Sir Thomas’s fifth and last America’s Cup challenge. Designed by Nicholson, she was the first British yacht to be built to the new J Class Rule and is the only remaining J to have been built in wood. After launch she was continually upgraded with changes to hull shape and rudder. The rig was also modified to create the most effective racing sail plan but she was no match for the faster US design “Enterprise”.Sir Thomas made all five of his America’s Cup challenges as a member of Royal Ulster Yacht Club, a club that continues to this day to have a strong involvement with The Cup.Shamrock V was sold in 1933 to Sir Richard Fairey (Fairey Aviation) who again was a keen yachtsman who campaigned it in company of two new steel J’s built during 1933 – 1934, Velsheda and Endeavour. After World War II, Italian owner Mario Crespi installed the elegant bird’s-eye maple interior.

In 1962 Shamrock V was sold to Italian yachtsman Piero Scanu who, in 1967, had the yacht taken back to Camper and Nicholson in Gosport, England for a complete, three-year rebuild. The hull was stripped back to bare steel frames which were sandblasted, repaired and painted. After this Shamrock V was entirely replanked in 2 inch teak and refastened with bronze. New systems, engines and rig were also installed. During the next twenty years she had a number of owners, and never fell into disrepair, like the other J’s. In 1986 the Lipton Tea Company purchased Shamrock V from Scanu and donated her to The Museum of Yachting in Newport, Rhode Island. In 1989 classic yacht restorer Elizabeth Meyer undertook another extensive refit. In 1995 the International Yacht Restoration School (IYRS) of Newport, Rhode Island purchased Shamrock V as part of their classic yacht collection. In 1998, the IYRS sold Shamrock V to the Newport Shamrock V Corporation. In 1999, Shamrock V returned to UK waters and completed a one year refit led by Dykstra Naval Architects at the Pendennis Shipyard in Falmouth, England, by her new owners. This comprehensive refit improved ballast ratio and with the addition of a new rig and sails, performance was dramatically enhanced. Shamrock V is now set to give many more years of service as one of yachting’s great queens and as one of just three remaining original J’s from the 1930’s.Shamrock’s Website