The 2022 season has seen the J Class gather considerable momentum. After five years marked by limited and sporadic racing at mixed fleet regattas, this season followed a consolidated, popular programme of class racing at three great events in the Caribbean and Europe. In many senses this season has been the perfect first steps on the course to 2024 when a very strong fleet of J Class yachts look set to muster in Barcelona to take centre stage at J Class World Championship during the 37th America's Cup period.

New owners breathed new life into two J Class campaigns and were rewarded with regatta wins on their respective debuts. As class racing returned to the Saint Barth's Bucket in March where three boats enjoyed classic Caribbean trade winds conditions, Ranger, took the top award ahead of Hanuman and Velsheda.

For the new, younger generation owner of Ranger, for whom their first ever racing sailboat is the 2003 built J Class, a debut win might have been unexpected. It was, however, a well-earned result for a team which is full of talent, with offshore and ocean racing experience fired by great enthusiasm with America's Cup winners Ed Baird on the helm and John Kostecki as tactician.

The theme of debutant winners continued in June at the Superyacht Cup Palma where the J Class returned in numbers for the first time since 2014. During last winter a trio of well-known Swedish entrepreneurs - who are all accomplished and passionate sailors - acquired the Swedish designed Svea from the USA, looking to enjoy racing with the class under the Swedish flag for the first time.

Under J Class world champion tactician and round the world racing ace Bouwe Bekking, a Svea team comprising a mix of experienced offshore racers as well as young, inshore 40-footer racers - most of whom had never been on board a J Class yacht quickly transformed into a regatta winning outfit. In mainly light winds on the Bay of Palma, all the competing J Class teams Svea, Topaz, Ranger and Velsheda - won races, but the Swedish flagged crew prevailed.

All four J Class teams, Svea, Topaz, Ranger and Velsheda sought to raise their game and peak at September's weeklong Maxi Yacht Rolex Cup, widely known as the 'maxi worlds'. The annual Porto Cervo, Sardinia showcase saw a glittering, diverse turnout of top maxis and crews and all were delighted to see the J Class back racing as a group, with their own starts, on the beautiful Costa Smeralda waters. There was a good mix of light to fresh conditions over the course of the event, the highlights, as ever, being close, boat on boat racing in the La Maddalena archipelago and up and down 'bomb alley'.

With one of the owners steering, Svea proved a cut above. They won four races from the five starts, Velsheda winning the other, to clinch their second major regatta title of the season and lay down a marker for the 2023 season and beyond.

In Porto Cervo one of Svea's owners a past Maxi World Championship winner - enthused, "The word is majestic. These boats are 180 tons, and it is tight racing. It is so different. You need to get used to the anticipation and a few more turns on the wheel, you really have to work hard. We did not have expectations, this year was a learning curve, we just wanted to learn to sail the boat and so here we have overachieved."

By taking second place in Porto Cervo and winning the Saint Barth's Bucket Ranger lift the 2022 season title, the Kohler Cup, topping off an auspicious debut. The delighted Ranger owner remarked "It is an amazing accomplishment for a boat which I don't think people expected to do so well. It is really gratifying. And that is entirely down to the team."

The season of class racing was contested under the latest version of the updated J Class rule which has reached a proven level of reliability, in no small part because of the comprehensive number of races sailed and the volume of data processed and analysed by J Class Technical Director Chris Todter, who has worked hard to refine the rule to take account as many of the speed and stability inducing factors as possible.

Appointed in April, J Class Secretary Stuart Childerley quickly appraised the position of the class and got to know the owners and teams and their respective objectives for the short, medium and long term. He has taken on the initiative to develop a sustainable, long-term programme of events, taking account of the downturn after a peak at the 2017 J Class World Championships in Newport USA.

Childerley, an international race officer, two times Olympian, (Volvo) Ocean Race sailor and international keelboat champion, is positive about the future of the class, which is set to see more boats racing in 2023 and beyond. "We are pleased to know Rainbow is starting an extensive refit in Palma, likely ready to race in late summer 2023, while Svea is planning to continue cruising and racing in 2023. Lionheart and Velsheda have recently commenced deck replacement projects and hope to sail in June 2023. Hanuman is expected to continue cruising on the NE coast of the USA. Endeavour, based in Palma, is sailed regularly, Shamrock continues her refurbishment programme in the UK and owner Hugh Morrison is looking forward to racing her in 2024."

Rainbow has been bought by passionate New Zealand racer Neville Crichton, and boat captain Matthew Sweetman reports, "We aim to have the boat out of the water at the end of November and do a full refit to bring her up to 2023 J Class racing standards. That will involve new teak decks, new paint, some work on the hydraulics. We aim to be on the water next year and we will see how we go before brining some new sails online. We want to do some training with some of the other boats before we go racing."

Sweetman expects Rainbow to be back in the water in July next year and reports that Erle Williams, who has a strong J Class track record previously on the helm of Ranger, will play a key role.

"We are looking forwards to getting the boat back racing, it is what they were designed to do. Everyone tells us Rainbow is a quick boat, but we will see. She has not really raced since Porto Cervo 2014 and we are eight, soon to be nine years down the line. Things have changed dramatically with the class since then, so we will see how we go when we are back in the water next year to see what else we need to do. We have a decent understanding of the class. Everyone is doing the same to make the boats faster and we need to see. With the America's Cup in Barcelona and Neville Crichton being a proud New Zealander, he wants to be there in a good position to compete at the front end of the fleet and Neville wants to fly the New Zealand flag."

The J Class programme for 2023 looks set to focus on the Maxi Yacht Rolex Cup, September 2023, and the Ibiza JoySail regatta, 28 September 1 October. 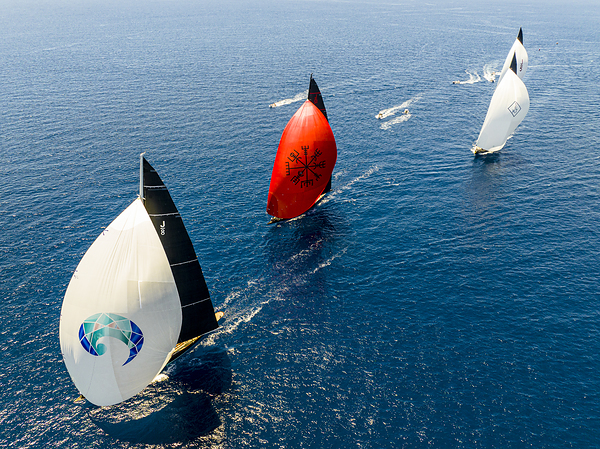