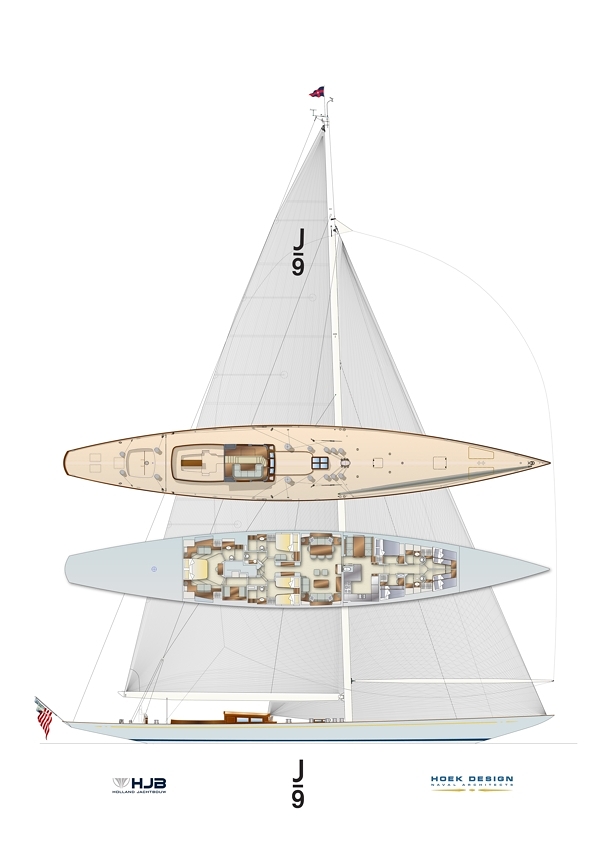 She was drawn as a contender for the last America’s Cup held with J’s, most probably for Mr Gerard B Lambert of Boston, the owner of Yankee and the three-masted schooner ‘Atlantic’. Ultimately, she was never built as the New York Yacht Club Committee favoured Harold Vanderbilt’s Ranger (J5) to defend the Cup.

Her original design had an 88 ft waterline length, effective keel and one of the lowest wetted surface areas. The maximum waterline length allowable without penalty in those days was 87 ft and Frank Paine calculated that it was better to accept a penalty for an increased waterline length in a trade off against sail area and displacement.

Hoek Design has carried out six months research on J9, using Numeca’s Computational Fluid Dynamics (CFD) software and she was found to perform well in light, medium and heavy winds, both upwind and downwind. During velocity prediction programme (VPP) research, seven competitive J Class hulls were analysed with the CFD software. Tests were carried out both upright and under heel at various leeway angles and speeds to study the difference between the hulls in resistance, lift production and Induced drag.

Gerard Lambert’s association with the America’s Cup spanned the J Class years of the 1930s. In 1934 he was part of the syndicate that built and campaigned Yankee.

Frank C Paine was the son of General Charles J Paine of Boston, a three times owner of the successful America’s Cup defenders for the New York Yacht Club, “Puritan” in 1885 (as part of a syndicate) and later “Mayflower” (1886) and “Volunteer” (1887). He was brought up in the world of yachts and was younger brother to an amateur yacht designer John Paine, who had designed ‘Jubilee’ for a Boston based syndicate for the 1893 Defence when ‘Vigilant’ was selected by the New York Yacht Club.

Frank went on to become one of the most important designers during the first half of the twentieth century. He worked alongside designers such as William Starling Burgess, and L Francis Herreshoff (son of Nathanial G Herreshoff) and subsequently was famous for the design of Yankee, which launched in 1930 and was renowned for being fast in a breeze and the beamiest of her contemporaries.

J9’s hull is being designed in high tensile aluminium construction and will be optimised extensively to race under the new handicap rules of the JCA.