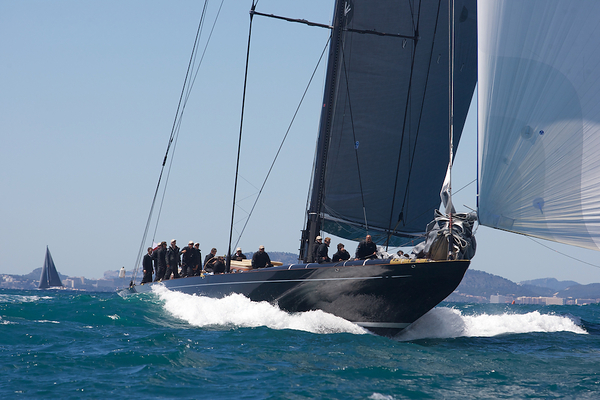 In 1930 Harold Vanderbilt achieved the pinnacle of yacht racing success by defending the America’s Cup in the J-class ‘Enterprise’. His victory put him on the cover of the September 15 1930, issue of Time magazine. In 1934 he faced a dangerous challenger in Endeavour that he actually challenged with Rainbow.

Vanderbilt contacted Sparkman & Stephens to discuss the possibility of a new J Yacht under the Universal Rule. It was agreed that Starling Burgess and Olin Stephens would each present four designs and Vanderbilt funded the operation. The project that would eventually produce ‘Ranger’ and ‘Lionheart’ had started.

Starling Burgess and Olin Stephens produced four designs for Vanderbilt; Models 77 A to F and two combinations. Models were built on a scale 1/24 and for the first time those models were tested in towing-tanks. When the trials were finished, the team concluded that 77-C either outperformed its rivals or came very close to the best.

The selected model 77-C was used to built ‘Ranger’, the first ‘Super-J’. The achievements of ‘Ranger’ have been exceptional. She sailed thirty-four times and won thirty-two times.

Fast forward to 2005 and Andre Hoek of Hoek Design got involved analysing the potential of the seven remaining hulls designed by Burgess and Stephens for the Vanderbilt syndicate. Using both state of the art computer models and now traditional water tank testing, Hoek advised to use hull 77-F as the one with the biggest potential. It is hull 77-F that has now been built as Lionheart, 75 years after she was conceived on the drawing boards.

The hull was eventually build by Freddie Bloemsma and Claassen Jachtbouw was responsible for building the yacht. She was launched 5 years after the project started, in the summer of 2010. She arrived at the racing scene in 2012 and showed great potential by winning the Kings 100 Guineas Cup in Cowes.

Lionheart is designed for cruising as well as racing, and was therefore built to MCA classification. Her deck layout shows two small deckhouses with sleek and low profiles as well as two cockpit areas.

The Alustar hull construction was done by Freddie Bloemsma’s specialist hull yard and was finished by Claasen Jachtbouw in 2011.