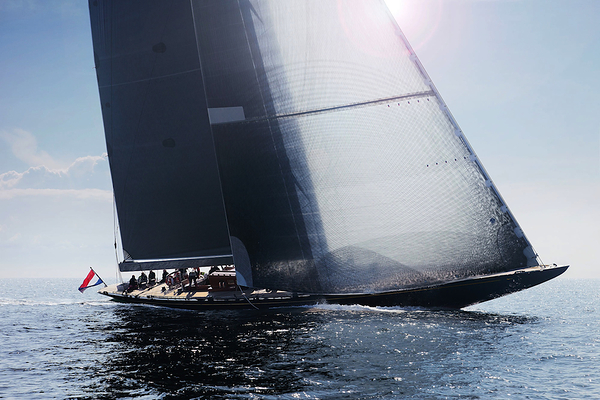 On May the 15th 1934, the William Starling Burgess Design J Class Rainbow was launched at the Herreshoff Yard in Bristol, Rhode Island, USA. She was built to defend the America’s Cup against “Endeavour” in 1934. The first 2 races were tough for Rainbow but the last 4 races she beat the Challenger Endeavour. Owner Vanderbilt laid Rainbow up in a dry dock and then refitted her. In 1937 she was sold to Chandler Hovey and contended for Defence of the Cup. Sadly for her, Ranger won and became the new defender for the next Cup. In 1940 Rainbow was sold for scrap.

Dykstra Naval Architects were chosen to give Rainbow a new life. A repeat client, the former owner of Windrose of Amsterdam, showed his trust in the Dykstra team to be the Naval Architects and designers for this new J Class yacht. The 46 meter schooner Windrose of Amsterdam set the Trans Atlantic schooner record at 10.5 days in 2005, the previous record of 12 days was set by Charley Barr with Atlantic in 1905.

The 40 metre J Class Rainbow is built in aluminum and designed according to the JCA (J Class Association) maximum performance rules. She launched in 2012.

After 78 years the famous J Class yacht ‘Rainbow’ sails again. This replica of the America’s Cup winner from 1934 was built by Holland Jachtbouw in Zaandam.

Rainbow was designed by Starling Burgess in 1933 and re-designed by Dykstra Naval Architects. She sails under the number JH-2.

Since her launch, Rainbow has won multiple awards, including Sailing Yacht of the Year (39m+) at the Superyacht Awards and the European Spirit of Tradition class at the inaugural 2013 Classic Boat Awards.