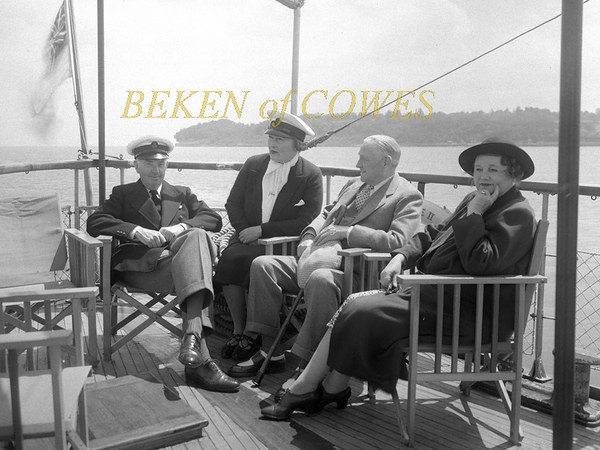 It is now clear that there was another J Class Yacht under development in 1937. Several years ago, drawings for a J-Class boat by Swedish naval architect Tore Holm were discovered by Fred Meyer, (Société Nautique de Genève – the Defender of the 32nd America’s Cup).

Now known as the Holm Project, this was to be a Swedish yacht with an innovative design. Many of the hull plates were made – and exist to this day. The project was put on hold prior to the outbreak of War in 1939 and was forgotten for more than 60 years. Endeavour and Endeavour II (K6) were laid up at Camper & Nicholson’s yard in Gosport, England.

Rainbow was scrapped. By the end of 1941, all the US yachts, which had been laid up were scrapped for their metal, with the last two being Yankee and Ranger. None survived. Yankee’s owner Gerard Lambert allegedly donated her scrap money from the yacht to Queen Mary to be used at her discretion in the London Hospital, in memory of the courtesies shown to Yankee by King George and the Queen herself.

Endeavour II was sold for scrap to Charles Kerridge Limited but her hulk remained until the late 1960s. Endeavour and Velsheda became houseboats in a mud berth on the River Hamble. This is where they stayed for more than 30 years, protected by the mud, which they had sunk into. Only Shamrock V was still sailing.

Endeavour II was broken up and scrapped in Southampton. Quadrifoglio (Shamrock V) had been hidden in Italy in a barn throughout the war years and following Crespi’s death in 1962 was sold to Piero Scanu, who saved her just two weeks before she was due to be broken up in Genoa.